Dong-man (Park Seo-joon) and Ae-ra (Kim Ji-won) were able to revisit what they love to do in last week’s episode but we’ve seen that the results were different for the two. While Ae-ra was able to showcase her excellent hosting chops, it wasn’t the case for Dong-man who seemed to be at not par with his top-level skills when he was younger. But what can they do when it feels like its their ‘dreams’ that are calling them. Well, let’s take a look at this episode’s highlights. 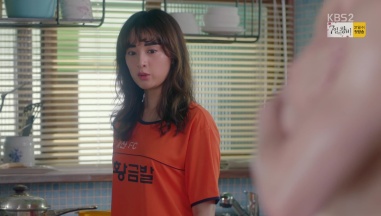 Scene: Ae-ra takes breakfast prepared by Seol-hee (Song Ha-yoon) across to Dong-man’s apartment, going in when he doesn’t answer the door. She can hear him singing at the top of his lungs inside the bathroom and she quips that he’ll be embarrassed when he sees her, only for her to be the one shocked when Dong-man appears before her with only a towel wrapped around his waist. He sees Ae-ra and berates her not to just come in as she pleases. Ae-ra, flustered by the sight of so much bare skin, turns around to reach for some bowls. She nearly drops the bowls straight on her head, prompting Dong-man to run across the room to grab them resulting in an awkward proximity between the two.

Well, you have to watch what it to know what comes next! Haha. It’s quite a nice twist to that infamous K-Drama shower scenes where the male lead gets to showcase their stunning physique. This one was done heart-fluttering and comedic at the same time. Ae-ra is one lucky girl!

Scene: Out of nowhere,  newly divorced Hye-ran (Elijah Lee) suddenly visits Ae-ra while she’s on break. She asks for Dong-man’s phone number or even better, his address but Ae-ra refuses, lying that he got married and that they’ve lost contact. Ae-ra goes on to say that it’s not proper etiquette for a woman to be calling a man who’s already married. She grabs her glass of water and fakes as if she’s going to throw water on Hye-ran face causing her an involuntary flinch. Haha.

Here comes the third wheel! We don’t know yet what was the reason for Hye-ran and Dong-man’s breakup but how can she be going after him as soon as she’s got divorced? I’m wondering if she dumped Dong-man because of his lowly status but then realized that she really loves him? Then it would be so selfish!

Hye-ran comes to me as really assertive so it’s a good thing that Ae-ra is not someone who’ll just back down because she might need to stand up against her soon.

Scene:  At the home shopping network, Seol-hee and her colleagues are asked to appear in a short video of people enjoying some cherries. While filming, she chokes on a cherry, and Joo-man (Ahn Jae-hong) runs over to give her the Heimlich. He performs mouth-to-mouth, determined to take the cherry out of her throat. Unconscious, Seol-hee relives a memory from a grade school play, when she’d been chosen to play Snow White Seol-hee. We hear her saying that it has always been her dream to be Snow White. She then opens her eyes and sees Joo-man resuscitating her.

I feel sympathetic yet worried about Seol-hee’s simple dream of becoming someone’s housewife. There’s no wrong in wanting to live with someone you love, but because of that one reason that it’s between two people, it takes a mutual effort to make it work. I hope Seol-hee re-evaluates herself and finds other ‘dreams’ she wants to pursue that makes her happy because although there’s no harm in believing in a love that can win against all odds, not every love story has a happy ending (right, Tipsy Ahjumma?).

Scene: Ae-ra grabs the opportunity of becoming the mall announcer as soon as she learns that the person manning the post is on leave. She excitedly calls Dong-man over and requests him to record her first announcement. She delivers her first spiel perfectly and dances in happiness after. Outside, the two listen to Ae-ra’s recording which eventually drives her to tears. She concludes that a person must really need what he or she loves to do in order to be happy.

Now, this one hit me in the heart. To see Ae-ra emotionally happy makes me actually think of what I really want to do in life and to start pursuing it. Well, enough of me or I might just tear up now. Back to our close friends. I was wishing that this taste of joy would make Ae-ra ‘greedy’ and pursue what her real dream is only to be cut short by what actually happen later in the episode.

Scene:  After having Moo-bin (Choi Woo-sik) mistaken for a bad guy, Ae-ra gives him a chance what to say what he wants with her. Without roaming around the bush, he says that he likes her and asks her to date him 10 times. Ae-ra is flustered by what she hears but finds him strangely cute for being straightforward. He offers Ae-ra to put on the sneaker he buys her which she initially thought as a lost item at the mall.

Yikes! I was not expecting to find this scene heart-fluttering but the entire set-up — the place, the mood and the conversation — is just perfect for one. Maybe it’s the writing or maybe it’s Choi Woo-sik? Either way, I’m firm with my loyalty to our real OTP. Poor Moo-bin, he might end up always losing the girl he likes to Dong-man.

Scene: Lying on the table at their secret hideout, Dong-man an Ae-ra talk about their school days, and how their dreams had changed daily. She closes her eyes and turns to face Dong-man, and with alarm, he warns her not to fall asleep. He starts taking a closer look of Ae-ra and begins complimenting her nostrils (yes, nostrils), her skin and her face. But as soon she reaches out for her face, she sits up and reminds him not to touch her because although skinship means nothing to him, it’s not the case for her. She goes as far as hugging him to prove him her point but the dumbstruck expression on his face tells us otherwise.

Do we still need to hear them say that they like each other? Because by the looks of it, I’m 100% sure they do. Agree? Maybe we just need that one inciting event to make them realize it and admit to themselves that they do pine for one another.

Scene: Ae-ra reports to work beaming with the excitement of getting her hands on the microphone again. But as soon as she enters the mall, she hears another girl’s voice doing the announcements. She soon finds out that another candidate has been chosen for the post (because of her connections) but she still demands to have the two of them interviewed. They deliver their own announcements and though she does so much better than the other girl, she ends up losing the job. Ae-ra agrees that she’s older, didn’t graduate from announcer’s academy, and has no connections, so of course she’d lose. Outside, she finds Dong-man waiting for her and he easily gets a hunch that something’s not right. Sitting on a bench, he offers to cover Ae-ra and tells her to cry as much as she wants to. Ae-ra begins to wail.

How could life be so harsh at times? She was just so happy moments ago but she’s got stripped of it too soon. Good thing she’s got Dong-man to be a shoulder to cry on (both figuratively and literally). It’s just so sad because Ae-ra has already scaled down her dream to make it realistic or achievable for someone who doesn’t have that impressive background like her only it to be snatched by someone just because of mere connection. I hope this setback won’t scare Ae-ra away and make her give up on dreams completely. There’s no question that this is a reality of our times, but don’t forget that if you can’t change the world, you can certainly change yourself.

Scene: Due to Coach Hwang (Kim Sung-oh)’s persistence, Dong-man finally gives in to his request to join him in watching a mixed martial arts show. He seems pretty bored by the games or at least faking it. He wants to leave but Jang-ho asks him to stay for the final match — which shocks him. The main match features Kim Tak-soo, who turns out to be Dong-man’s rival during his heyday. Coach Hwang tells Dong-man to look at how well Tak-soo is living now, asking why Dong-man should hang his head in shame when Tak-soo is practically a rock star.

Hmm, I’m not sure if this is the best way Coach Hwang should motivate Dong-man to try and get back to martial arts again. Shouldn’t we be pursuing our dreams because it makes us happy and not because our ‘rivals’ are doing well in living it? Well, you can’t underestimate anger as a great driver of change.

If I’m not mistaken the park where Moo-bin and Ae-ra had their conversation is South Korea’s newly unveiled highway-turned-park. It’s a former overpass into which is converted to a plant-covered walkway in Seoul. See the pictures the below:

One thought on “K-Drama Reaction: Fight My Way | Episode 3”