Our hero is on his way to revolution, and he is taking his friends with him.

Difference between Je-hoon and Joon

I understand Joon’s (Kang So-ra) deep need to redeem the image of her late father after learning about his bribery scandal with Gangsu Foods. It’s really not easy to believe that his father was involved in bribery, especially after seeing him suffer/dying because of it. But I liked Je-hoon’s (Gong Myung) point when he confronted Joon about her extreme acts of convincing people to speak up. It’s not like Joon was the only one suffering from this dispute. Had she even thought of all other people involved in this? Je-hoon was right. Maybe people refuse to speak up not because they are bad, but because they are weak. Although I was a bit disappointed that Je-hoon did not tell Joon about his own father being Gangsu Foods’ another sacrificial lamb, injecting some harsh truths on Joon’s misconception is enough for now.

What makes Joon and Je-hoon though was the way they reacted when both their fathers became sacrificial lambs of powerful people. When his father was imprisoned to cover up Hyuk’s (Siwon) wrongdoing, Je-hoon used this painful memory as a shield of disgust against the Byun household. He played along with the family. He slowly rises up to the ranks of the company to *hopefully* make himself powerful one day. But Joon… she is a different case. She always faced her problems head-on, taking every possible move. Although some of her ways are a bit over-the-top fictional, at least we see some improvements with the current situation. She got the answers she deserved. She was able to reveal that her father was innocent, of course through the help of Hyuk. 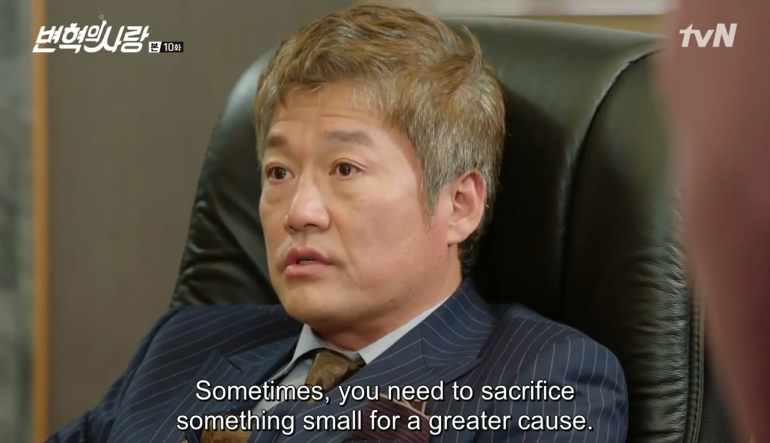 Our flirty flight attendant Ha Yeon-hee (Kim Ye-won) is on a roll this week! LOL. She has reached the peak of her imagination. After suspecting police officer Jang Cheol-min (Kang Young-seok) to have a crush on her for just merely helping her carry her luggage upstairs, she is now assuming Je-hoon to also have a crush on her! Hahaha. I like her; she’s annoyingly funny. I can’t blame her though. What would you feel if your crush suddenly helps you and brings you food when you least expect it? Won’t you feel giddy and overthink too? 😂

I realized it today, why she had been keeping a boundary between us.”

I admit I also realized just today why the show insisted on this “just friends” level between the two when obviously, they now like each other romantically. The Mon Ami card will be used against Hyuk’s father! Clever. Technically, Hyuk was not lying when he told Dad that Joon’s is just his friend. Though my fangirl heart cannot wait for these lovebirds to admit they mutual feelings for each other! Huhu

Can I just get a moment of silence for Woo-sung hyung (Lee Jae-yoon) and his evil mouth? I loved Lee Jae-yoon, the adorable hottie, but I swear I hate him in this drama! How can you back stab your own brother like that?

How adorable is Kim Ki-sub ahjussi in that corporate attire??? Fighting~