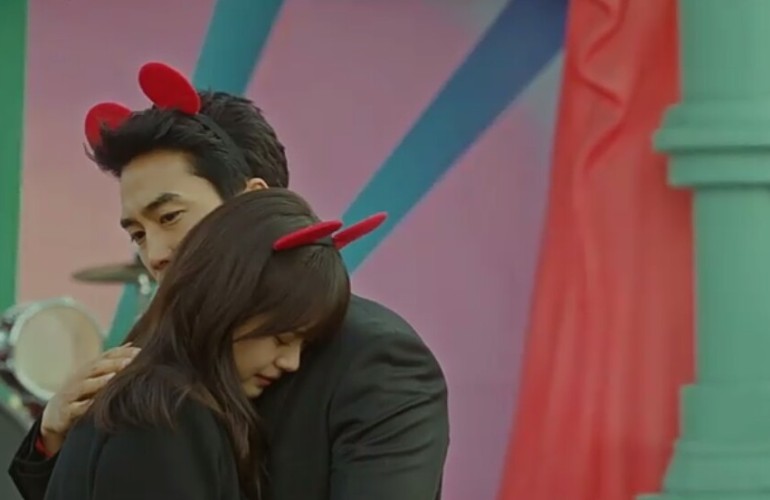 I feel like my whole experience of watching Black is a lie. I thought it was Oh Man-ho (Choi Min-chul) who ordered all those murders to cover up his father’s sexual affairs with minors 20 years ago. But it was revealed that it was actually presidential candidate Kim Yeon-seok who is behind all of this. Woah. I was deceived by his fake concern for the Mujin building collapse victims! We also learned that the video tape he’s after isn’t the one with Kim Sun-young’s (Lee El) confession about the involvement of Oh Man-ho and Oh Man-soo’s father in the teenage prostitution in Mujin but the one with the recording of him raping the poor girl. Now, that tape has to be exposed to reveal what kind of a monster he truly is. Jinja, I can’t believe he still has the guts and the face to run for presidency! He’s still alive, but he already has a special place in hell waiting for him. But for him to pay for his sins, that goddamned tape has to be located first! Where on Earth could it be?

Though Oh Man-ho is now cleared of all the crimes I thought he perpetrated including the death of his own father and the attempted murder of Oh Man-soo, I still don’t regret hating him. I will never forgive him for beating up Sip-gyeon to death! But I have to admit that I feel sorry for him and Man-soo because they had to undergo this mess that rooted from their father’s sins.

Wae, writer-nim!?! Why did you have to kill such a good character? I’m so disappointed in you. I hope that you let Crazy Dog live at least until he solved the Mujin teenage prostitution case that he worked on so hard. You should’ve at least let him find justice for the death of Clara whom he loved so much. I’m so brokenhearted about this, and I’m sure that the evil presidential candidate is the one to be blamed. I hope that he will soon be busted together with his minions: the middle fingerless hitman, who by the way looks like Ha-ram’s father, and Captain Lee.

Now, the last thing I can wish for Crazy Dog is for him to find eternal peace and live happily together with Clara in the afterlife. Salute to you, sir!

A LITTLE TOO LATE?

Why is it that we realize things only when everything is already complicated? Well, I’m happy that Ha-ram (Go Ara) and Black (Song Seung-hun) are now officially dating, but I’m also sad that they will soon face huge tests this early in their relationship. What will now happen to them once Ha-ram discovers the truth that the Han Moo-gang she loves is possessed by a grim reaper? I’d like to believe that Ha-ram’s mother has a point. No matter how much Ha-ram loves Black now, she will still feel shocked, and probably scared, once she uncovers his secret. How can I question that when Ha-ram’s mother experienced that herself? She was very much in love with her husband, but she ran away without looking back when she learned that he is not human. It’s amazing how fate could be an asshole sometimes. I mean, why Ha-ram has to experience the same fate her mother had? Isn’t that too cruel?

Also, why do I feel like the drama-loving grim reaper knows something about the reason why Black is stuck with Moo-gang’s body? What is it that he’s been hiding?