What would you feel when you experience something amazing for the first time, then suddenly you realize it was all fake? Our hero is growing very conflicted after that first kiss. He is having all sorts of emotions – from feeling giddy to getting skeptical about everything. He described his first kiss as flabbergasting, but I saw it as love. He was astonished by the sudden reaction of his own body to that kiss initiated by a ~robot~. As much as I am happy for this couple’s development, I cannot help but feel sad for Min-kyu’s (Yoo Seung-ho) confusion. His lack of physical contact with anyone for the last 15 years led him to believe that what was in front of him was a machine. He never really experienced the power of human touch since his parents died, and when Jia/Aji-3 (Chae Soo-bin) arrived in his life, everything just went wayward. He can now touch other people without experiencing allergic reactions. He doesn’t have panic attacks anymore.

And now the kiss… obviously he was unprepared for it. Although unconsciously, he was slowly developing affection for Jia, he still thought of her as a robot. Poor Min-kyu, I hope he gets to know the truth sooner than later. It pains me to see him so confused and sad, hoping that Aji-3 is a real human. At this point, I honestly cannot tell what was Min-kyu’s “realization” after visiting Sta. Maria team’s lab. One may initially think that he discovered Aji-3’s real identity now, but I cannot help but also picture that his “true” realization was that he fell in love with a robot. That drunken scene broke my heart.

Baek-gyun (Uhm Ki-joon) trying to get back together with Jia is so 2017. Ahjussi, can you just move on so that we can all enter 2018 on a clean plate?

Kidding (and age gaps) aside, I somehow understand what Baek-gyun is going through. Yes, we all know the Jia’s side of the backstory – she was verbally abused and taken for granted by her genius ex-boyfriend, but none of us really cared about Baek-gyun’s side. It’s been years since their break-up but he still cannot eat a sandwich properly because he associated it with Jia. The break-up might be Baek-gyun’s fault, but he deserves to have his own closure too, don’t you think? 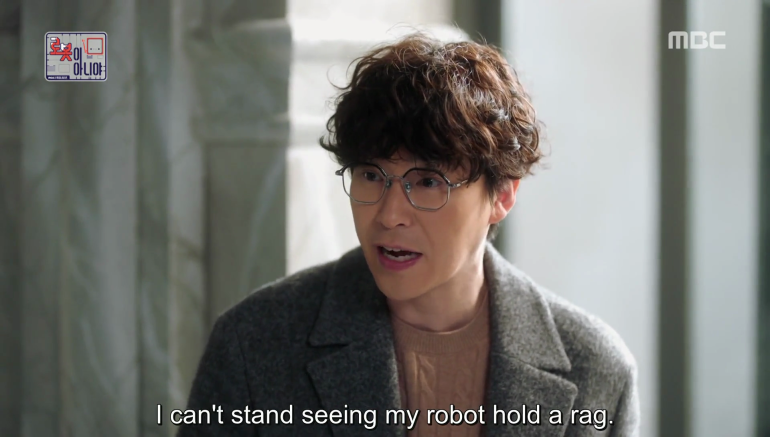 Baek-gyun and Pi (Park Se-wan) can make a great pair. This is so far my favorite OST of this drama: