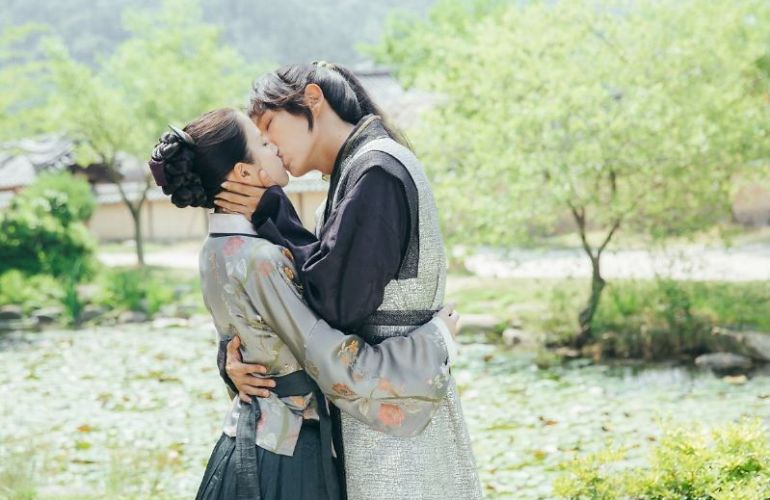 Annyeong yeorobun!!! So, we are officially kicking off our month-long anti-Valentine celebration here in our blog… Just kidding! We are all about spreading love and good vibes, that’s why I have decided to give you an early Heart’s Day gift… a Flashback Sessions feature of Moon Lovers: Scarlet Heart Ryeo! It’s a perennial favorite of all of us suckers for melo-romance, and also a gateway drama for some millennial K-drama fans. Despite its notorious ending, Moon Lovers was a great fusion sageuk overall. So let’s begin!

Yes, this line was what convinced me to watch this show… Kim Sung-kyun uttered this line in the pilot episode in the present timeline as an unnamed street dweller listening to Go Ha-jin (IU) while she ranted about her present struggles. I thought this was a fun drama because of its eye-candy ensemble cast, but I was completely wrong. Every letter of this show spelled misery.

Moon Lovers: Scarlet Heart Ryeo was a K-drama based on the Chinese novel Bu Bu Jing Xin by Tong Hua that aired from August to November 2016 for 20 episodes. It was one of the best dramas of 2016 that was well received by international fans but only had an average rating performance in South Korea. I remembered choosing Moonlight Drawn by the Clouds over this, but decided to jump ship because of Lee Joon-gi. No ragrets!

The drama revolved around the adventure of 25-year-old Go Ha-jin (IU) who slipped through time during an eclipse and traveled all the way to the Goryeo era. She would then wake up in the year 941 in the body of orphan Hae Soo living with her cousin, and there, she would get entangled with the many royal princes of the ruling Wang family.

Please know that it was really hard to choose what OST to feature in this segment! Moon Lovers: Scarlet Heart Ryeo came up with epic original soundtracks, which I believe was one of this drama’s major strengths. Forgive my weak heart, but all I can embed for you is my all-time favorite Moon Lovers OST, but you should definitely check out the others, too! ㅋㅋㅋ

Popularly known as Goryeo’s 4th monarch, King Gwangjong. In the story, he was the fearsome prince who hid his face behind a mask, and was given the derogatory name “wolf dog.” He fell in love with Hae Soo and did everything to protect her.

The gentle and intelligent prince whom Hae Soo first fell in love with.

Also known as Goryeo’s third monarch, Jeongjong. In the drama, he was the main villain among the Wang brothers who spent all his life eyeing the throne. He was groomed by his queen mom to become the next ruler of Goryeo, which made him ambitious and cunning. Also, who would forget Jong-hyun oppa’s notorious black eyeliner?

He was rich and sly. He liked women. He only sided with wherever he found profitable for himself.

Another fan favorite, Eun was the grandson of one of Goryeo’s founders Wang Gyu. He was a playful prince who briefly fell in love with Hae Soo. He would be in an arranged marriage with the general’s daughter Park Soon-duk (Z.Hera), and their tragic love line would forever scar our hearts.

His mother was from the Silla dynasty and was famously known as Goryeo’s flower boy. He liked everything about arts: sketching, calligraphy, music. He was also one of Hae Soo’s most loyal friends in Goryeo, and he would fall in love with Princess Woo Hee, the last living royal of the late Baekje.

Grumpy tidbit: Baek-ah’s real name in history was really Wook, but since there was another Wook in the drama, he had to take another name.

One of my favorite princes, Jung was the most favored brother in the Wang household. Everyone loved him. He secretly loved Hae Soo and protected her until the end. Spoiler alert: he became Hae Soo’s dearest husband.

Moon Lovers: Scarlet Heart Ryeo was undoubtedly one of 2016’s most buzzed dramas. It was pre-produced and star-studded. It was tragic but lovely. It had amazing cinematography but had no coherent script. It screamed a lot of potentials but it did not live up to the expectations. It played with your emotions, then left you hanging.

Remember when we were gifted by K-drama gods with a pilot episode like this?

Real talk: I think one of the weak points of Moon Lovers was the introduction of the Wook-Soo love line BEFORE the actual OTP. I swear the second lead syndrome was so strong on this one because we already fell in love with Wook when So appeared on our screens. The audience already invested their feelings with Wook and Soo, and then all of a sudden, the drama sailed on the So-Soo ship.

This has got to be in the top 10 of my most heartbreaking dramas of all time because the second half of the series was marred with heartbreak after heartbreak. I can still remember that rabbit towel and the tragic end to a love story that has yet to begin!

Wang So is the only prince in Goryeo who can turn a tragic moment into a romantic one! All hail to one of K-dramaland’s most iconic umbrella scenes! This moment was also Soo’s turning point in opening herself wholeheartedly to So. When Soo was doing the kneeling plea, she saw Wook turn his back on her at the same moment So arrived and offered his cape as a shield. R-o-m-a-n-t-i-c.

What also made Moon Lovers stick to everyone’s hearts was how the drama ended. All season long, all of us hoped for a happy life for So and Soo, because duh, Wang So deserved all the rainbows and stars in this world. But it NEVER happened in his lifetime.

Maybe one thing that Moon Lovers wanted us to realize was Wang So’s bloodied journey to the Goryeo throne was not a fairy tale at all. The plot might have Hae Soo as its fictional character, and it gave Wang So’s character some giddy-filled love line, but the reality remained the same – that one could not have all the good things in this world at once, no matter who you were. He wanted to be king for Hae Soo, but he ended up losing her instead.

You know what they say… the more it hurts, the more you wanted to stay. LOL. I just made that up because that’s what I felt exactly while lounging on this K-drama. It’s one of those dramas that blinds you, but at the same time makes you hope for a brighter tomorrow in the next episodes. The torture was so real until the end. And the bitterness of waiting for a Season 2 just to satisfy our need for a better ending still wrings our scarlet hearts.

[Credits to SBS’ Moon Lovers: Scarlet Heart Ryeo for the photos and GIFs used in this blog]