Soo-jin (Lee Bo-young) has met her real mother and it’s now about how she’ll deal with the truth. She never intends to find her so stumbling upon her all of a sudden proves to be really difficult for her.

Why did she leave Soo-jin?

True to the words of Dr. Jin-hong (Lee Jae-yoon), Soo-jin found herself meeting with her birth mother (Nam Gi-ae) again because that’s the only way she can get a closure. She paid her a visit and returned the bank book her mother opened for her and said she will never accept anything from her even if she has to sell her own stuff. She asked her why she abandoned her but Mom kept mum even breaking down to tears.

This reunion let us see what Soo-jin has been thinking all of this time. She was quiet (and even looks emotionless) since she was a child but this unexpected meeting helped her blurt out what’s in her heart. Soo-jin has been thinking that her mother left her because she hated her and that she couldn’t live a good life because she’s her child. Growing up, she harbored a guilt, she shouldn’t carry to start with. Now, I understand why she has grown distant and finds it hard to trust anyone.

Mother’s refusal to answer Soo-jin made me think the reason has something to do with her time in prison. I have a hunch that Mom killed her husband because he’s abusing Soo-jin. Soo-jin has no recollections of what really happened but in the first episode, we’ve seen her having momentary flashbacks of a violence perpetrated against her.

I hope they would find their way to reconciliation but with adoptive mom (Lee Hye-young)’s fiery confrontation with Soo-jin’s birth mother, looks like we’re up for more complications.

How long the secret will be kept?

I’m becoming more worried that more and more people are knowing about Yoon Bok (Heo Yool). Dr. Jin-hong won’t be a problem because he forged a promise with Yoon Bok not to tell their secret but it’s the other way around with Soo-jin’s reporter sister, Hyun-jin (Go Bo-gyul). She’s a journalist so there’s a strong chance she’ll learn about Hye-na’s case. Moreover, the fact that Soo-jin’s adoptive mother also discovered the truth, there’s no way she won’t interfere with the two as she would always do.

Mother is such a heavy drama so to have the slightest funny in this show was such a treat. Older brother brought his younger sibling to have a free haircut from the barber shop lady as promised only to be stopped midway (again!) because of Soo-jin’s appearance. 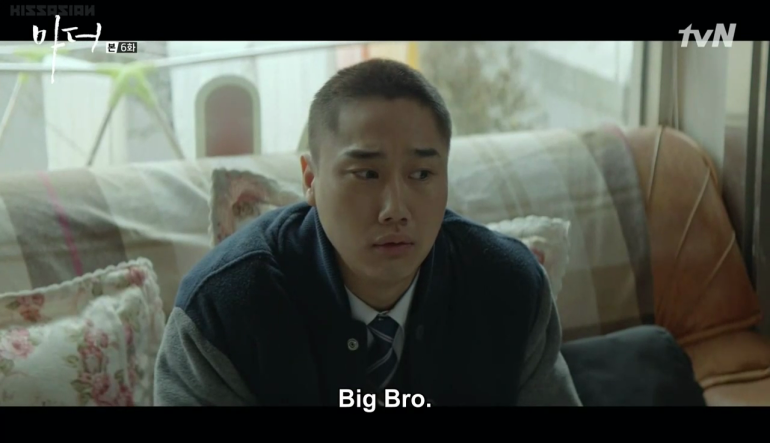 I’ve been hearing this during the credits part but now it’s being used in the episode itself. Have a listen to this sad but beautiful song for Mother by Yuna Kim.

Even your voice that I longed for
Has disappeared, it’s all gone

Endless loneliness, I know that feeling
Prayers that you had to swallow in
Tired after a long, harsh day
I’ll hold you when you’re broken

Endless loneliness, I know that feeling
Prayers that you had to swallow in
Tired after a long, harsh day
I’ll hold you when you’re broken

I will hold you once again
You, who resembles me, I’ll hold you again