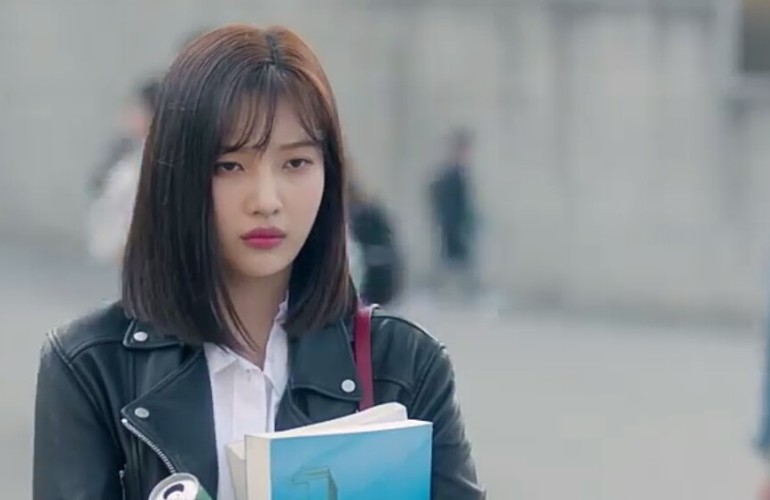 I now get why Kwon Si-hyun (Woo Do-hwan) and Choi Soo-ji (Moon Ga-young) are best friends: they’re both very hard to understand! It’s amusing and irritating at the same time how Si-hyun could be very sweet and caring to Eun Tae-hee (Joy) one moment, then turn as cold as ice the next.

He was like an angel sent from above when he helped Tae-hee find a place to stay after her slot at the Myoung Jeong Dormitory was cancelled by Soo-ji. I was very touched by his action because I could really feel his genuine guilt and worry, but all my praises for him were quickly thrown out of the window when he came to fetch Soo-ji at the university and acted almost like he didn’t know Tae-hee at all the following day!

But what’s more unbelievable is that Si-hyun went back to his ‘sweet’ mode once again that night and even asked Tae-hee to eat together as if nothing weird happened earlier!

Si-hyun’s ‘sweet’ mode continued until the next day with him acting like a worried boyfriend towards Tae-hee when he picked her up at the train station for their overnight trip. He was very gentle and caring to her the whole time of their stay at Si-hyun’s villa that I can almost see laser beams spitting from Soo-ji’s eyes every time she would look at them.

Until Si-hyun switched back to his cold self anew, shutting Tae-hee out by telling her that he hates drawing contrary to her belief. But then, when Tae-hee was trying the calm her hurt feelings, Si-hyun suddenly appeared like a ghost and begged her to stay. What the heck is this, jinja?!?

Soo-ji is a hopeless case. Did she forget that she’s the one who asked Si-hyun to make Tae-hee fall for him in order for her to take revenge against Lee Ki-young (Lee Jae-kyun)? Then why is she getting jealous? The more episodes we get, the more I see how broken her way of thinking is. If she couldn’t stand seeing Si-hyun getting close with another woman, then stop that petty revenge plot and betting game! It makes no sense in the first place.

Admittedly, Soo-ji got my sympathy at first. Actually, all the three of them. They’re living comfortable lives, yes, but they’re never happy because their complicated family affairs won’t just allow them to. But now, my sympathy for them is slowly fading especially whenever Soo-ji is being a selfish, self-entitled, and petty brat. Si-hyun and Lee Se-joo (Kim Min-jae) are also no good because they tolerate Soo-ji’s absurd revenge plot! But seeing how much affected I am by Soo-ji’s character only means that Moon Ga-young is doing a great job, right?

Aside from the revenge plot, this drama also offers juicy love triangles not only from the young characters, but also from the adult ones. Si-hyun’s dad may appear tough and cold-hearted, but he automatically turns into a romantic guy whenever he’s with the woman he loves, and that is none other than Tae-hee’s mom. He’s probably so happy to be driving around with her that he forgot about his prior appointment with Soo-ji’s omma. I wonder how Tae-hee and the trio would react once they discover the adults’ interconnected love affairs. But I’m more curious as to how Tae-hee and Si-hyun’s growing attraction for each other will be affected by this especially that we know how much they love their respective father and mother. Let’s see in the next episodes!

P.S. A dancing See-jo is so adorable I wanna take him home!