This review is a little late because Live actually started its broadcast on March 10, however, there was no subbed material available making it impossible for me to have a look at it (can someone sponsor my Korean language classes? LOL).

This drama is the third series from the team-up of writer Noh Hee-kyung and director Kim Kyu-tae which made my expectations for it shot up 10-times. It’s about the lives of police officers–from the lowest-ranking cadets and patrol officers to their superiors. At the center of the story are new police officers Han Jung-oh (Jung Yumi), who’s short-tempered and has expressed her disgust for male chauvinism early on, and Yeom Sang-soo (Lee Kwang-soo), a pretty average guy who just wants a stable career. The drama’s first two episodes already managed to give us a glimpse of some of the realities about the lives of police officers, one of which is that not all who enters the force are aspiring law enforcers, some just want a stable job just like our two main characters. Secondly, it also showed us a preview of the sacrifices that our cops made in the name of their duty. We have the police couple Oh Chang-yon (Bae Sung-woo) and Ahn Jang-mi (Bae Jong-ok) who are on the brink of divorce, apparently due to the former’s lack of time for his wife because he’s crazy about solving crimes. The police officers also have to ignore their moral compass at times because their duty is to enforce the law, not interpret them. That’s the harsh reality that bit Sang-soo and Jung-oh when they were tasked along with other trainee cops to disperse a crowd of university students fighting for their rights.

Verdict: Most of the dramas involving police officers were all about skills and tactics on how to catch the baddies, so having Live which chooses to be more of a human drama than a procedural one is quite refreshing. The use of indie English songs and the beautiful cinematography are also present, something you could always expect when it’s PD Kim Kyu-tae who’s at the helm.

Next stop is a drama about power, influence, and deceit–The Great Seducer. It may surprise you, but this drama which such a mature theme revolves around young adults belonging to the upper echelon of the society. The first batch of episodes introduced us to the kind of world they live in and that’s the stereotypical portrayal of the high society where money declares the rules–even when it comes to love. The titular role goes to Woo Do-hwan who plays Kwon Shi-hyun, a conglomerate grandson who preys on women to get what he wants. Meanwhile, Joy’s character Eun Tae-hee is an average scholar student who’ll become Woo Do-hwan’s next target. Although this drama is tipped to be mainly about the love game between the two main characters, it’s interesting how Joy got so much little screentime in the first four episodes, all thanks to first-time villainess Moon Ga-young who takes on the role of the vengeful Choi Soo-ji whose story took the biggest chunk of the pilot episodes. Rounding up the main cast is Kim Min-jae’s role Lee Se-joo, a playboy chaebol who’s Shi-hyun’s best friend and who’s harboring a secret love for Soo-ji–and who’s a potential villain. The seduction plot is mainly driven by Soo-ji’s desire to take a revenge on the man who dumped her by ensuring he won’t get the girl he likes who happens to be Eun Tae-hee. A lot going on, huh? And just when you thought the relationships between the younger cast are complex enough, the web of connections between their parents are equally complicated. All are ready to play the game of power and seduction but who’ll end up as winners and losers, that remains to be seen.

Verdict: It’s no wonder why The Great Seducer is currently the most buzzworthy drama. It’s intriguing and scandalous. But what I believe is lacking in this one is that there’s nothing in its first four episodes that really tugged my heart. It’s entertaining at least.

My Ahjussi
Network: tvN
Genre: Melodrama
No. of Episodes: 16 (75 Minutes per episode)

From the highest of the society to the lowest one: We’ve got My Ahjussi. This new drama from Another Oh Hae-young writer Park Hae-young is about three middle-aged brothers, who each has a misfortune to deal with, and a strong, cold woman who has been living a hard life of her own. They come together, healing each other’s past scars. Well, that second line is yet to happen because the first two episodes were all about pain and hardship. Lee Sun-kyun plays the upright engineer Park Dong-hoon who’s yet to discover that his wife (Lee Ji-ah) is cheating on him with his boss, while IU plays Lee Ji-eun who is enduring many hardships in life which includes poverty, getting beaten by an ex-beau and taking care of his old sick grandmother. The other two middle-aged guys are Park Sang-hoon (Park Ho-san). the eldest son who was fired from his job and then whose businesses failed, and Park Ki-hoon (Song Sae-byuk), who’s yet to see his glory days as a filmmaker 20 years from the day he was invited to the Cannes. The connection between them haven’t been really locked in; Dong Hoon and Ji-eun only got involved with each other after a failed bribery attempt at the company which got the former in hot waters. But what I really like about this show is the realistic depiction of life’s struggles probably because the directing was from the skillful hands of director Kim Won-seok from Misaeng. You’ve got to see that office drama to understand what I’m saying. But you cannot also discount the fact it’s also because the actors were really doing a great job in their interpretation of their characters, especially IU. You could really see the weight of the burden on Lee Ji-eun’s shoulders even just by watching her navigate through her daily life quietly and emotionless.

Verdict: The drama was a little slow at first but it drew you more and more as it progressed. Each of the characters carries emotional pain that you just can’t wait for them to finally heal individually and together. 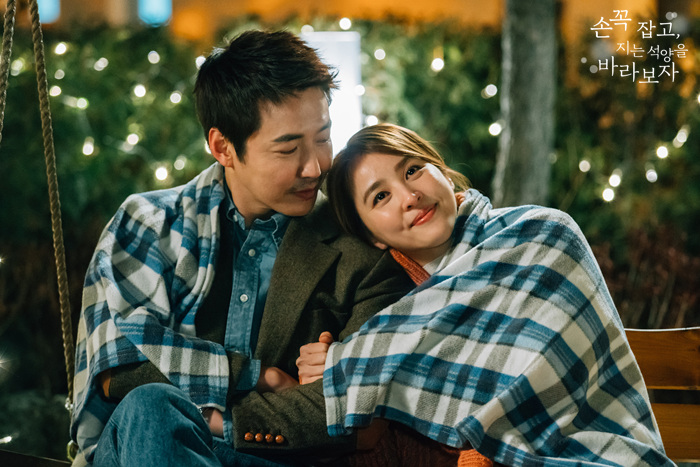 At first, I thought that the only problem I’d have with this drama was its mouthful title, but Let’s Hold Hands Tightly and Watch the Sunset proved to be far worse with its problem-ridden but boring storyline. It is about a married couple who have to look back on the time they have spent together and rediscover themselves as they suddenly have to confront death. Yoon Sang-hyun plays Kim Do-young, an architect who has finally got his shot to success after spending most of his years in a slump. Han Hye-jin plays his wife Nam Hyun-joo who’ll do anything to support her husband–and that includes letting him work with his first love Shin Da-hye (Yoo In-young) who’s bent on snatching him from her. But that’s not the only problem we’ve got because apparently in the first batch of episodes, Hyun-joo was diagnosed with a brain cancer making the story far more problematic. Writers say to make a story engaging, it needs to have a conflict. However, as I watched this issue-beleaguered drama, my initial reaction was to get myself out of this mess. Maybe, I’m tired of terminal disease and the drama that goes with it. I couldn’t bring myself to symphatize with any of the characters especially with the heroine who feels like that she has to pay debts to her husband for marrying her instead of her first love. Sorry but aside from the picturesque locations and beautiful interior of the couple’s house, I couldn’t find any other thing interesting. I dragged myself to finish its first four episodes, to be honest. It’s sad that this has got to be Han Hye-jin’s comeback drama.

One thought on “First Impressions: Live, The Great Seducer, My Ahjussi, Let’s Hold Hands Tightly and Watch the Sunset”