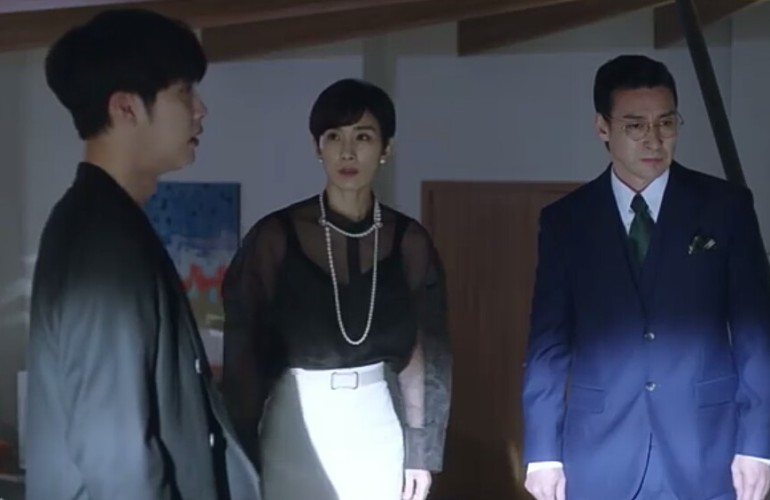 Myeong Jeong Hospital President Myung Mi-ri (Kim Seo-hyung) is surely one ambitious woman who has two targets: JK Group vice chairman Kwon Seok-woo’s(Shin Sung-woo) heart and the JK Bio company. This is why Choi Soo-ji’s (Moon Ga-young) fear that her mother would take what is ought for Kwon Si-hyun (Woo Do-hwan) really has basis. And now that President Myung knows that Si-hyun isn’t really vice chair Kwon’s biological son, her chances of taking over JK Bio became stronger. I thought Secretary Yoon genuinely cares for Si-hyun so I felt betrayed when he revealed the Kwon family secret to President Myung. Ahhh, love is so powerful it can make people forget about loyalty.

The already messy picture got even messier with Soo-ji’s discovery that the woman vice chair Kwon is seeing despite the fact that he’s already engaged to her mother is none other than Eun Tae-hee’s (Joy) omma. I don’t know until when Soo-ji can keep her mouth shut about the whole thing, but I’m sure that our main OTP’s fresh relationship will take a hit once this reaches either of Si-hyun or Tae-hee’s knowledge.

This impending heartbreak can’t be helped even if Tae-hee’s omma distances herself from vice chair Kwon after she learned that he’s already engaged to be married. BTW, isn’t it unbelievable for Tae-hee’s omma to discover about vice chair Kwon’s engagement this late? I mean, this is all over the news so it’s impossible that she’s unaware of it. Even the people around her appear to be clueless, making the whole scenario harder to believe.

Can I just rant about how disappointed I am with the parents in this drama? I hate all of them except for Tae-hee’s father, who got my full sympathy after learning of how he and Tae-hee’s omma met. I felt so bad for him because it’s unfair for Tae-hee’s omma to approach him and use him to forget her first love only to leave him in the end. I felt even worse thinking about how he still longs for his wife, while the other party is already back in the arms of her first love. So I kinda felt triumphant when I saw how shocked Tae-hee’s omma was over her discovery of vice chair Kwon’s engagement. I felt like karma is doing a good job. So yeah, Tae-hee’s omma is my most hated parent in this drama right now.

Next is Si-hyun’s father. I hate how he treats Si-hyun like a crap after knowing that he’s not his real son as if it’s our poor hero’s choice. He kicked Si-hyun out of their house, but he doesn’t want the truth about their relationship to be revealed to the JK Group chairwoman because Si-hyun serves as his strong foothold in the company. *shaking my head*

President Myung may be an ambitious and capable doctor, but she sucks at being a mother. How can she still push through with her marriage to the Kwon family when it’s clear that her daughter disapproves it?

Lee Se-joo’s (Kim Min-jae) father is another one. Tell me, what kind of a father would want his son be beaten up in front of him just because he’s causing troubles? He’s horrible!

How dare Ko Kyung-joo’s (Jeong Ha-dam) omma get intimate with a much, much younger guy, who happened to be Si-hyun, when she has a husband?

Park Hye-jung (Oh Ha-nui) is so cute, but I can’t stand her self-righteous and kiss-ass omma!

We’re only halfway through this drama, which means more complications are yet to come! 😂😂😂