“The world was filled with stories of people who cheated on each other. But when it became my own story I can’t describe it.”

Life has its own way of pushing people to be tough . My Ahjussi Ep 10 showed us that Lee Ji-an may still be young compared to the people around her  but we can all consider her a ssen unni (쎈언니). Let’s look at the three moments that she proved this to us, but first here’s a preview of what occurred in this chapter.

Dong-hoon’s brothers, along with the neighborhood soccer ahjussis went crazy trying to find him after hearing about the fight. This moment just proved how strong their bond is.

Though they all looked like running teddy bears, I find Ki-hoon especially adoring and funny in this scene.

Ji-an paid off all her debt using the money she received from CEO Do Joon-young.

Ji-an accompanies grandma to the assisted living facility with the help of Dong-hoon.

Kang Yoon-hee meets up with CEO Joon-young and yelled at him for not telling her that Dong-hoon found out about their affair. She even blamed him for her husband’s injuries.

Dong-hoon decided that he wants to get the director post not because of “the bastard” Joon-young but because of his family. He even told Executive Director Wang that he doesn’t want to concern himself whether or not a bastard like Joon-young becomes a failure.

Joon-young was furious as he heard all that happened during Dong-hoon’s meeting with the other executives through Lee Ji-an phone spyware.

Joon-young hires a private investigator to tail on Dong-hoon.

Ji-an demonstrated once again in this episode that she is worthy of the “tough unni” title. She doesn’t crumble to pressure, has a reason to everything and is always one step ahead of everyone.

Joon-young confronts Ji-an after finding out from the private investigator that Dong-hoon assisted her with halmeoni’s transfer to the facility, volunteered to pay off her debt and even fought with Kwang-il. Ji-an nonchalantly answered him that she is using her sad family situation to get close with Dong-hoon and make him feel sorry for her.

Joon-young prodded on asking why she’s only telling him this now and accused her of having a soft spot for the Earnest Ahjussi. I admire how Ji-an’s face did not even change in this scene as Joon-young interrogated her. I thought maybe her eyes will give her in but no, she remained composed and easily had an answer to the CEO’s queries.

She argued that saying this piece of info to Joon-young will not do him any good since it can be used by his adversaries as a positive thing for Dong-hoon. According to her, it can be weaved into a story emphasizing Dong-hoon as a good person who is helping a poor, old lady in the neighborhood.

As to whether Joon-young bought this story or not is no longer important since a nightmare just happened to him. Ji-an saw someone taking  a picture of them. She was able to trip the man following them and got his camera that contains pictures of them and the CEO with Dong-hoon’s wife.

Later, Ji-an was seen returning the camera to her Gamer Minion, Ki-beom. I can’t say anything else except that she’s like a pro who is always ahead of everyone. She even made Joon-young paranoid after warning him to be careful since his opponents might be tailing him as well.  Ji-an’s argument that Joon-young will have a hard time proving that she and Dong-hoon have a romantic relationship is brilliant since they don’t even have a single text message nor phone call.

Lastly, Ji-an saw Joon-young’s guy following Dong-hoon and she decided to set up a stage for him. She passed by and purposely ignored Dong-hoon so the latter called her. She marched toward him and asked her to slap the back of her head so that her feelings for him will stop. Say whaaaaat? Yep, she effortlessly tells a bewildered Dong-hoon that she wants to put an end to her emotions for him. She even mentioned how pathetic she feels since Dong-hoon does not wear the slippers she gave him.

Ji-an kept following Dong-hoon who is walking away. She keeps telling him to hit her and even shouted that if he doesn’t do it, she’ll think that he has feelings for her and will tell it to everyone. The Earnest Ahjussi lost his control and smacked her head. She stayed on the ground and did not get up immediately, letting the private investigator see what happened.

Let me introduce to you, my fellow K-Drama drunkards, actor Ahn Seung-kyoon who plays Ki-beom in My Ahjussi.

Ahn Seung-kyoon debuted in the small screen with JTBC’s Solomon’s Perjury in 2016.

He starred in KBS2’s School 2017 as Ahn Jung-il, a member of my hated Brat Gang, with fellow Solomon’s Perjury alum Seo Ji-hoon oppa ❤ ❤ ❤ and Jang Dong-yoon. 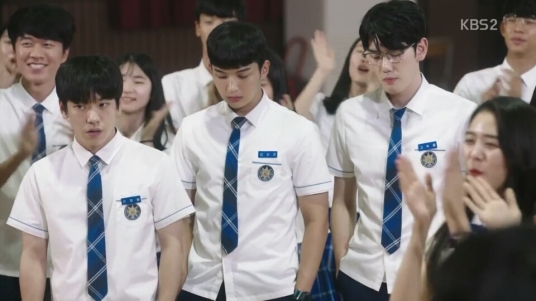 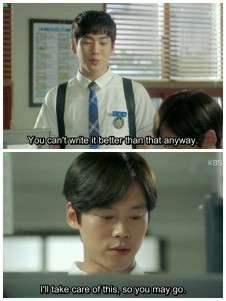 And had a minor role in Drama Special: If We Were a Season top-billed by Jang Dong-yoon and Chae Soo-bin.

Here he is hanging out with a smiling Ji-an a.k.a. IU.

❤ Ji-an’s confession to Dong-hoon may be staged but do you think there’s some truth to it? Catch you on My Ahjussi Episode 11.

One thought on “K-Drama Reaction: My Ahjussi | Episode 10”