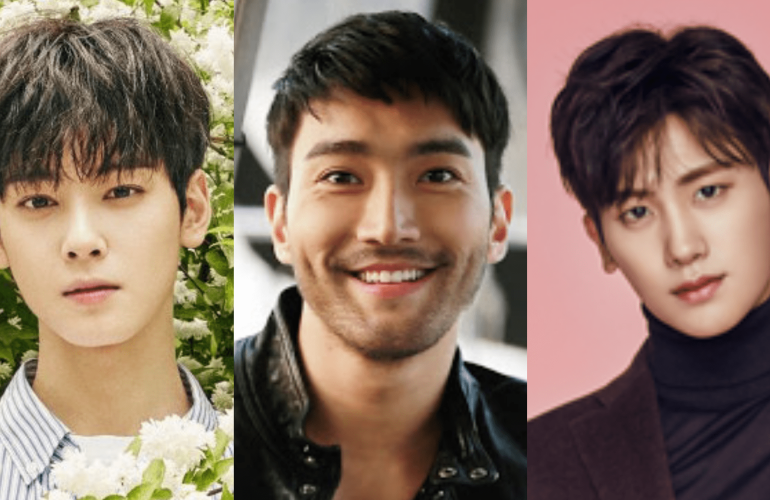 Umchina (엄친아) is the abbreviated term of  umma chingu adeul (엄마 친구 아들), which literally translates to mom’s friend’s son. Umchina is used to describe someone who is good at everything. Remember how our mothers always compare us to the child of her friend  who excels at school, is gentle-mannered, comes from a good family, has stunning visuals, and just freakin perfect that sometimes you want to punch them? Yep, those are umchinas.

Let’s meet 10 umchinas of the K-Dramaworld who will give prince charming a good run for his money.

This real life Sungkyunkwan alum is the epitome of Mr. Perfect. Aside from his killer visuals, he excelled in academics. Joong-ki oppa scored 380 out of 400 in the national college entrance test which gained him the admission to the said prestigious university. According to Times Higher Education’s 2018 World University Rankings, Sungkyunkwan University is the third best university in South Korea. In 2012, he finished his degree in Business Administration minor in Broadcasting.

Did you know that oppa actually represented his home city of Daejeon in a national short track speed skating tournament?  Unfortunately, he stopped doing the sports in high school due to an injury. Song Joong-ki also placed second on KBS Quiz Korea.

Remember Reporter Kim/Ten in She Was Pretty? Well, this Super Junior member-turned actor could actually be him in real life. Si-won’s father owns a trading company in Japan and is the former president of pharmaceutical company Boryung Medicine. His family also owns Hyundai Department Store, one of the three major chain of department stores in South Korea.

Si-won oppa knows how to play the drum and the piano. He is also a taekwondo black belt holder. He graduated from Inha University in 2012.

Lee Seung-gi is not just “The Great Sage, Equal of Heaven,” he is also known as the Ballad King and Nation’s Umchina. Oppa hails from a family of businessmen. He had flying colors and was elected student council president in middle school and high school, he also did good in sports and arts.

Seung-gi oppa obtained his degree in International Trade and Commerce at Dongguk University, where he also received a Special Achievement Award during graduation. He then pursued post graduate studies and earned two master’s degrees, Trade Theory as well as Finance and Cultural Contents.

Aside from his honey-like voice, oppa can also cook!

This actor-singer combo can solve my heartache with one smile and instantly make my day with his voice from the heavens. Since high school, he was quite popular for being the lead vocalist in the school band.

Hyung-sik oppa is currently studying Business Administration at Digital Seoul Culture Arts University. His father is also a Board Member of BMW Korea.

Daniel Henney looked like he stepped out straight from a fairy tale book. He was born and raised in Michigan. He did well in his studies and was also a star basketball player at Carson City-Crystal High School. He led the Eagles to the MHSAA Central region (CSAA) championship during his senior year.

Oppa earned basketball scholarship offers from Alma College and Albion College, then later attended the University of Illinois in Chicago. Fun fact: aside from portraying Agent Zero in X-Men Origins: Wolverine, did you know that he voiced Tadashi in the hit Disney animated film Big Hero 6?

It’s impossible that Kang Dong-won’s name won’t be included whenever South Koreans think of top visuals in the entertainment world. But he’s not just a handsome face, he has an IQ of 137 placing him in the highly gifted category. The 1% of Anything actor graduated in Hanyang University, which ranks 8th in South Korea, with a degree in Mechanical Engineering. He also holds a a master’s degree in film from  Sangmyung University.

Oppa’s father is an engineer and is an ex-vice president of SPP Heavy Industries.

EXO’s leader is not only known for his hard-working face but also for being kind, considerate and polite. Born Kim Jun-myeon, he was academically outstanding serving as class president in elementary school and vice-chairman of the prestigious Whimoon High School student body.

His family lived in the apartment building next to where Si-won resides. His dad is a professor and his mom was a teacher. This Rich Man‘s hobby is playing golf.

2PM’s main rapper and leader is also an intellectual. He studied in Bedford High School, Massachusetts where he was a member of the National Honor Society. Taec-yeon oppa proved to be a well-rounder as well being in the school’s Chess Club, Jazz Band and JV Soccer Team.

Part time actor and full time angel Park Bo-gum is widely known for his good manners. He learned to play the piano at an early age and served as a pianist of his church choir. Bogummy was also a member of Seoul Mokdong Middle Scshool’s swimming varsity team.

He recently graduated as a musical theatre major from Myongji University. And despite being busy as prince Yi Yeong and genius baduk player Choi Taek, oppa represented his university’s cultural overseas exchange program in Europe and even directed his graduating class’ production of Hairspray.

This visual slayer is like your favorite character who came out of a manhwa. He is known in school for always being in the top ranks, polite and being irrationally good looking. His former classmates mentioned that he was well known even among their mothers.

In elementary, he served as class president for several years and was the student body president in the sixth grade. He was also the captain of his school’s soccer and basketball teams in middle school.

The Best Hit‘s MJ studied at Hanlim Arts High School and was accepted to Sungkyunkwan University in November 2015. And if that’s not enough, oppa can also play the piano, guitar, flute and violin.

❤ So, who’s your favorite umchina and real life prince charming? Take a look at our other Top 10 lists below. Annyeong!

<< Waiting for Oblivion: Top 10 K-Drama Quotes for the Ones Left Behind

<< Sexy Wookie: Top 10 Reasons Why Ji Chang-wook is the WORST

<< Would You Rather: The Oppa Edition