Isn’t it satisfying to witness an evil force’s downfall?

What more can I say aside from I love it? I love how Bong Sang-pil (Lee Joon-gi) and Ha Jae-yi (Seo Ye-ji) unmasked Judge Cha Moon-sook (Lee Hye-young) in front of the people of Gisung whom she has been fooling all these years. I’m also glad that Nam Soon-ja (Yum Hye-ran) and Pres. Ahn Oh-joo (Choi Min-soo) have decided at the last minute to side with justice.

Pres. Ahn is definitely a bad guy here, but why do I feel sorry for him? Maybe because I pity him for the way he lived his entire life as Judge Cha’s dog. But there’s also no one to be blamed for his fate but him because he allowed himself be swallowed up whole by greed. Nevertheless, I don’t want him dead as death is an easy escape. It would be much better if he is alive and paying for all his sins in jail.

It may not be the ending that I prefer for Pres. Ahn, but it’s undeniably one of the most memorable scenes of this drama. I have nothing but praises for both Lee Joon-gi and Choi Min-soo who displayed very intense and convincing acting skills during their confrontation scene just before the latter’s character Pres. Ahn pulled the trigger through his head. Hats off! 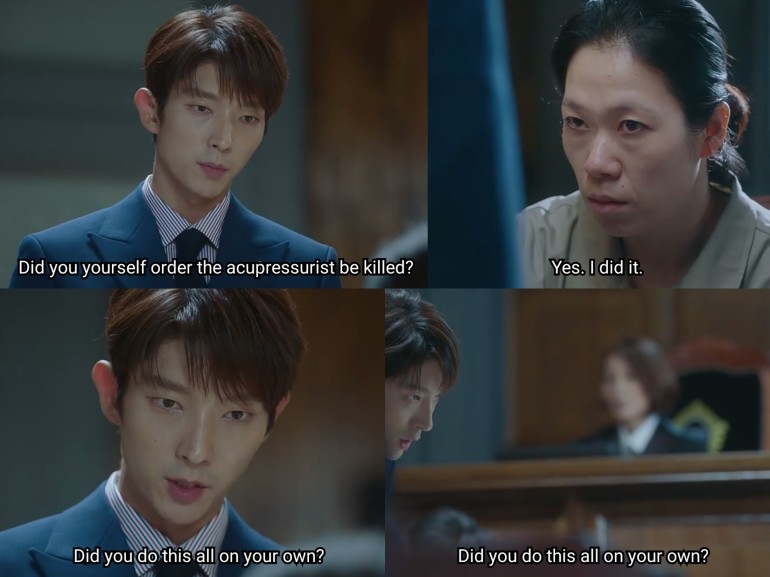 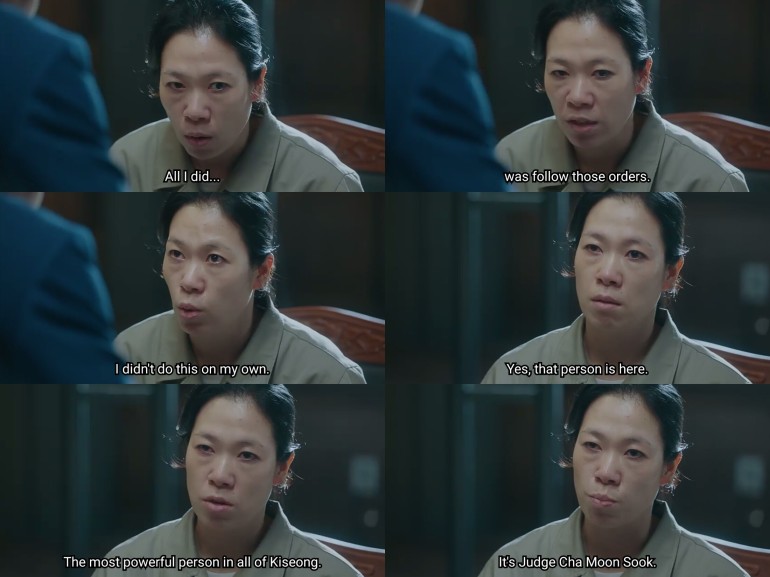 Meanwhile, I think Madam Nam got what she deserved. I’m actually already cursing at her because I thought she would take the blame for Judge Cha. That’s why I was so relieved when she maneuvered and said she was only following orders. You just made the best decision of your life, Madam Nam. I hope that your jail time would turn you into a better person. I also hope you would have a great time tormenting Judge Cha in jail. I’ll count on you on that! LOL.

Okay, it’s true that Kang Yeon-hee (Cha Jung-won) also realized in the end that her mother did the right thing, but I still consider her a useless daughter for initially forcing Madam Nam to cover up for Judge Cha for her sake. It’s sad that there are no significat developments on her character. I was hopeful at first because I thought she would be one of the reasons for “The Seven’s” downfall. I thought she joined the group because she wanted to do an investigation into its members, but I was wrong. Sadly, her character bears no weight to the point that the drama can go on with or without her.

Like what I’ve said, I love how Sang-pil and Jae-yi stripped off Judge Cha’s mask in public, but I feel like it could’ve been more satisfying. I wished people threw something at her like eggs maybe? I wished she was mercilessly shamed on the local and international media. I wished the drama made us see an almost insane version of her because I hate how calm and collected she was until the very last minute. I hate her even more for not even apologizing to Sang-pil and Jae-yi until the end.

The more I dislike Judge Cha, the more that feel otherwise for Lee Hye-young. She earned my respect over her effective portrayal of the drama’s main antagonist. It’s very evident because she never failed to get into my nerves every single time during the entire series. She’s simply at her best.

I’m so satisfied with Lawless Lawyer as a whole. Thanks to its solid storytelling and the cast’s effective acting performances it made my list of highly recommended dramas. Of course, there are some flaws here and there, but it’s overall goodness is more than enough to overshadow it.

If there’s one thing I would wish for, that would be more moments together for Sang-pil and Jae-yi especially in the finale. Of course you can say that their love story isn’t the drama’s main focus, but I can’t help but wished for more skinship between the two. Though I’m happy that they are bringing their “lawless” style of justice to Seoul. I’m also happy with the birth of the new OTP of Tae Kwang-soo (Kim Byung-hee) and Geum Ja (Seo Ye-hwa)! It seems like Geum Gang’s (Lim Ki-hong) dream of going up the societal ladder by having a lawyer brother-in-law will come true as Kwang-soo is set to study law. This is one of the drama’s little details that have a huge impact. Yeah, I’m looking at you, Yeon-hee. 😏

That’s all I have to say about the finale! Thank you to everyone who followed my K-Drama Reactions for this drama. Until next time!