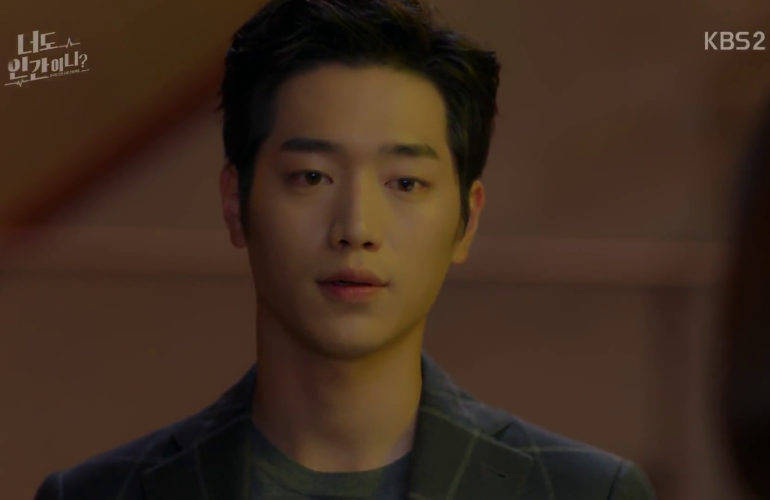 If only I have the power to create that notorious kill switch, I’d gladly do so. And I have so many humans in mind!!!!

Waaa, I expected Reporter Jo (Kim Hyun-sook) to confront So-bong (Gong Seung-yeon) about the USB and Namsin3’s (Seo Kang-joon) real identity sooner or later, but I never thought it would be like this. I thought they were friends??? This useless bitch had the nerve to blackmail So-bong whom she allegedly consider as her jagiya (sweetheart) and a close friend. She even calls her dad as appa (father)! Like what’s her real deal in this show? This character is just a purely nosy, useless B-grade paparazzi wannabe who sold off her friend for money before and now had the guts to threaten her.

I’m not sure yet if I’m going to root for David (Choi Duk-moon) in this show, but if I have a choice, I’d choose the lesser evil right away. At least David’s doing something to prevent Oh Laura (Kim Sung-ryoung) from gladly activating that kill switch! LOL at this so-called Mom. Her real son just moved a finger and she is already itching to get rid of the robot!

I feel really bad for Namsin right now. His innocence just wrecks my heart. As if he asked to be put in this situation in the first place. All he cares for is to be useful to these ruthless, ungrateful people surrounding him. I’m just really thankful that So-bong is trying her best to protect him at all cost. Even though she may seem to be annoying and overstepping her boundaries, at least she is the only one in this dramaverse whom I can rely on when it comes to Namsin’s safety.

Going back to Sin’s mom, I can’t believe she had the nerve to say out loud that she can’t be a mother to both Sin AND Namsin3!!! Hey, you’re not the only person in this world who have two sons. Other families even have more children, even identical twins exist in the real world, so what’s the logic behind this statement? That Namsin3 is a robot? Then she is definitely missing the point! The point here is why does she have to destroy the robot just because the human is awake? The robot did not even exhibit any sign of greed or selfishness. She said it’s to prevent further complications, but again that’s not the point. She already made three versions of this robot, what’s the problem of making another one or a new face for Namsin3? So-bong is right. She is just self-centered scientist who created something for her own comfort. 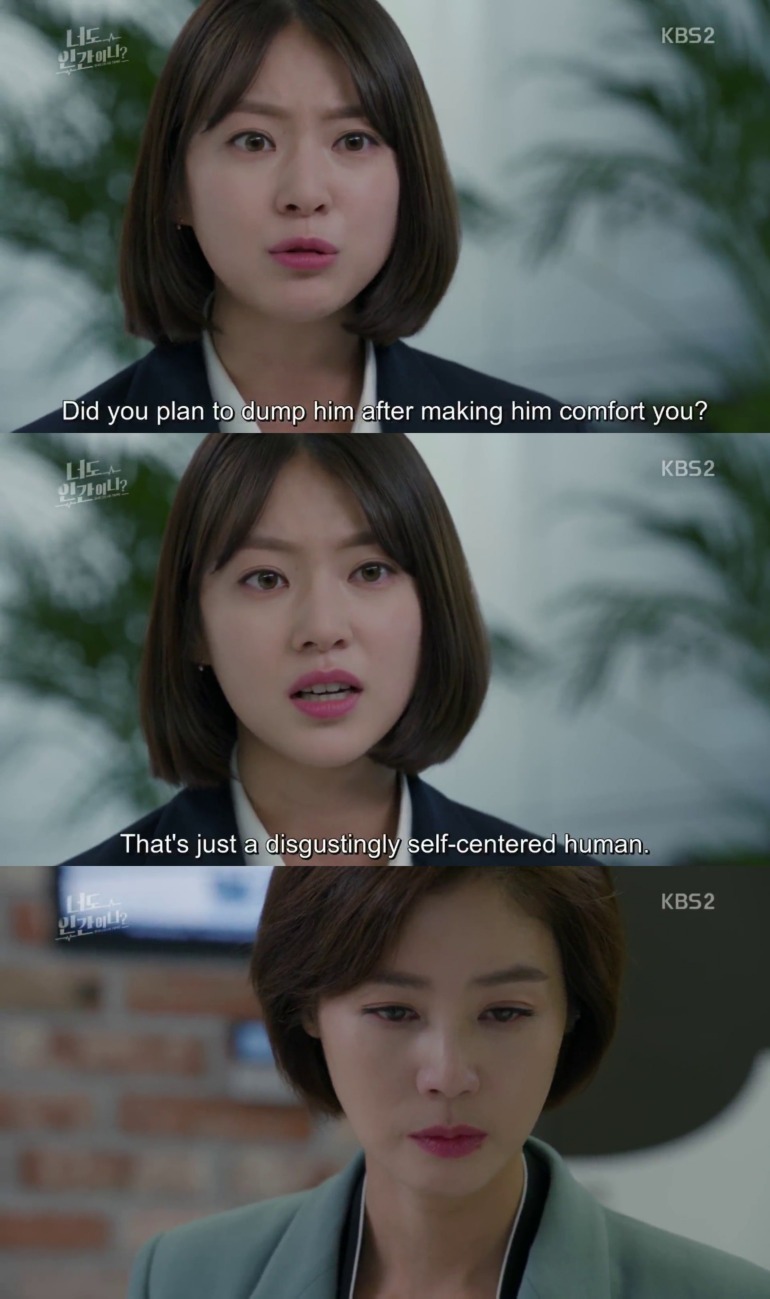 Kill switch for Ye-na and her Dad

Even though we are not really sure if Ye-na (Park Hwan-hee) really told her Dad Seo Jong-gil (Yu Oh-seong) about Namsin’s real identity, she is still to blame. She could not even stop her own father from tracking her. I just loved Seo Jong-gil’s face during the confrontation scene with Sin and the rest! His face was just like he won the lottery then realized he threw his ticket stub! LOL. I liked how he stormed to the office with the lifeless Namsin 1 (I still don’t know how the hell he got it) and then showed to everyone how Laura was able to create a “monster” who looks like Sin.

Can we also talk about that cliffhanger? I know there’s a debate whether it was the real Sin or it was Namsin3. When Director Seo stormed to the auditorium telling everyone that Sin is a robot, he tried to prove that he was real by making his hand bleed. And it gave So-bong  and everyone in the room (including us) the shock of their lives! WHY the hell is Namsin3 bleeding???

But then, just to join the conversation, I think he is still Namsin3, the robot, for these three reasons: 1) He told So-bong about his FT sensor having problems since that abduction incident. I suddenly remembered during the first few episodes how they showed us the robot’s “veins” enveloping the machine. 2) He talked to David before that confrontation and smiled to So-bong when he saw her. Why would the human Sin do that when he has never met David and he is not in good terms with So-bong? 3) If reality prevails over fiction, how could a person who’s been in coma for so long be able to go to work as if nothing happened?

PS: I would like to commend So-bong for this character development. She used to be annoying, but at least she now owns up to her feelings and admit in front of everyone that she likes Namsin3, the robot! 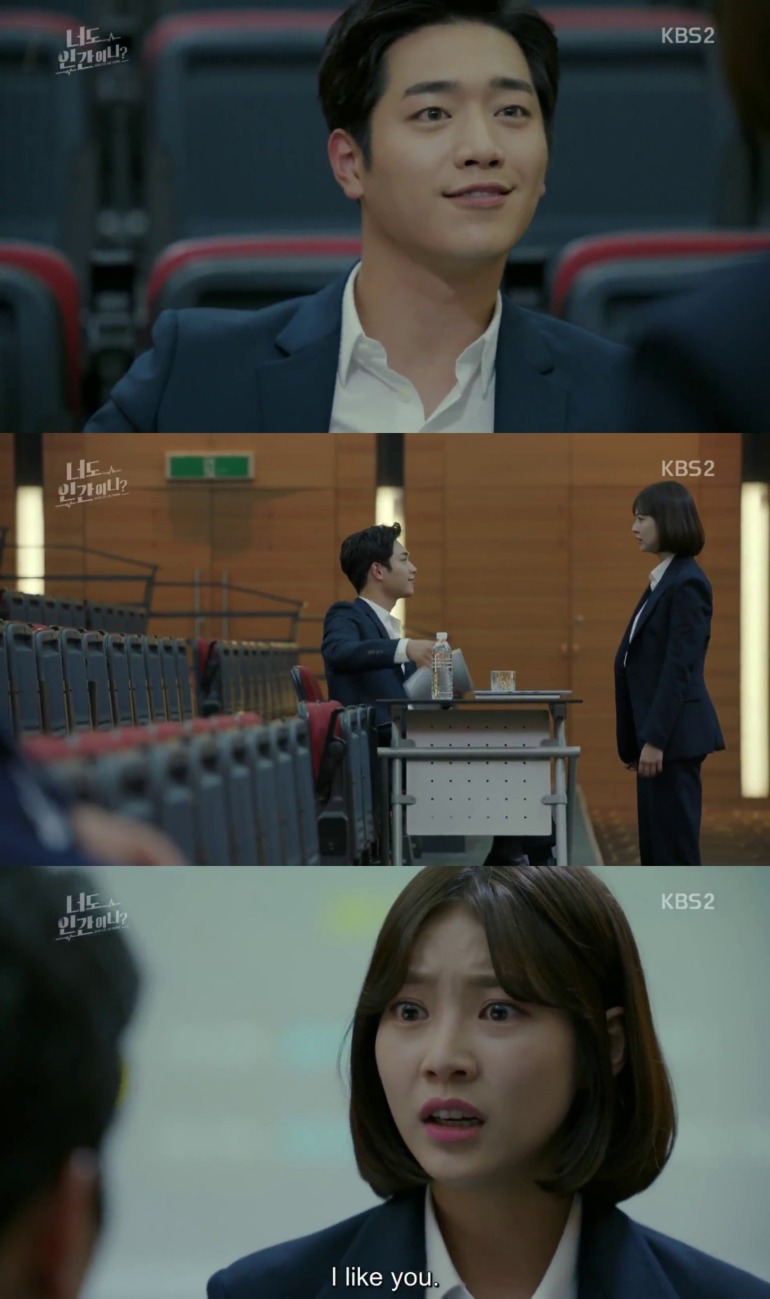