Millennial K-drama Fans grew up watching a lot of hit fantasy series written by the Hong Sisters. We cherish a lot of scenes and characters from Sassy Girl Chun-hyang, Couple or Trouble, and My Girlfriend Is a Nine-Tailed Fox the same way we fondly look back to our after-school-afternoons. But as we grew older, our taste for creative contents also widened. Can Hotel Del Luna, a fantasy drama, be as believable and unforgettable as its predecessors?

Just like any other Hong Sisters-penned drama, Hotel Del Luna started with fast-paced narrative mixed with comical sequences and solid character introductions. The premiere episodes were effectively crafted to draw us into the world of the main character: Jang Man-weol.

Jang Man-weol is an orphan who ended up living with a group of thieves. She grew up a fighter because she had to be. Despite her tough personality, she has a soft spot for her childhood friend Yeon-woo (Lee Tae-sun). It wasn’t until she met Ko Chung-myung (Lee Do-hyun) that the wall protecting her heart began to crumble.

This general, who has to protect Princess Song-hwa (Park Yoo-na) – the daughter of a King who probably doesn’t care about his people and is scared of a coup, became smitten to this skeptic thief. He kept on seeing her without knowing he was putting her at risk. Their unfortunate meeting led to Jang Man-weol’s downfall and her being tied up to the Moon Tree.

The brief scene on how she became the owner of the Guest House of the Moon gave her an intriguing aura despite her seemingly cold façade and shallow love for all things fancy. The fragmented narrative on Jang Man-weol’s past life (and I would strongly stand by on this one) is the best part of this series. Usually, a character’s backstory only serves as a cynical catalyst to justify a character’s jadedness and disillusionment.

Jang Man-weol’s story, on the other hand, isn’t just a disillusioning event. It was a story on its own but was perfectly intertwined with the present status quo.

Mago (Seo Yi-sook), a great goddess, became a constant part of Man-weol’s life. She orchestrated everything that happened throughout Man-weol’s 1,300 years wait. She was also responsible for bringing Ku Chan-seong (Yeo Jin-goo) into the Guest House of the Moon, now known as Hotel Del Luna. 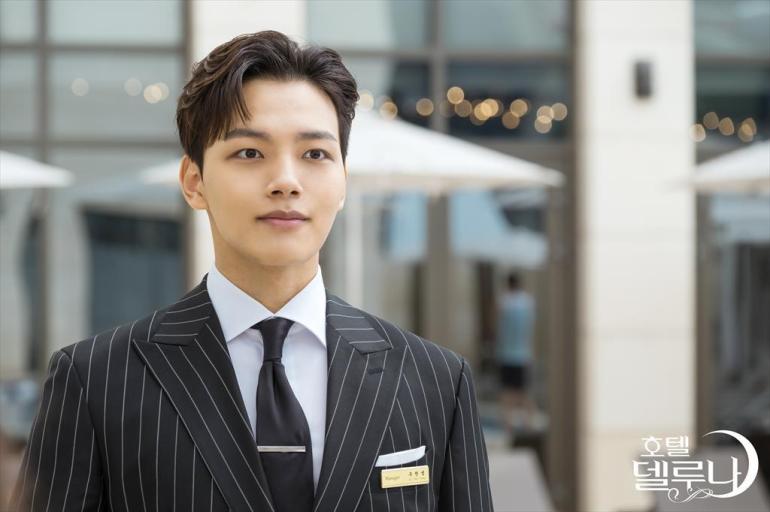 Man-weol’s deal with Chan-seong’s father reminded me of Beauty and the Beast and it was no surprise as the Hong Sisters always love fairytales. The good thing is I’m a sucker for fairytale retellings. But everything after that introduction was purely Hong Sisters’ creative imagination. 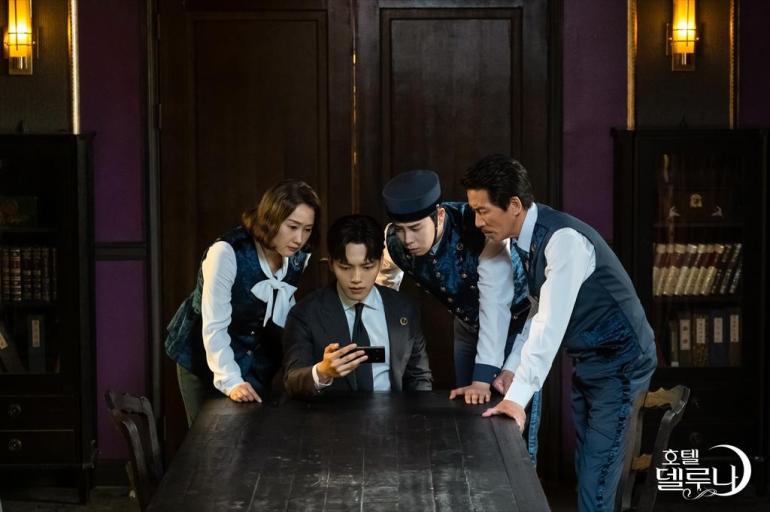 Just like The Master’s Sun and Hwayugi, Hotel Del Luna followed an episodic structure with the main storyline – Man-weol’s journey to afterlife – remaining in the forefront of every ghost encounters. There were a lot of standout subplots in this series but at the end of every episode, we all learned that the wandering spirits’ story were plot devices to slowly resolve Jang Man-weol’s inner conflict. 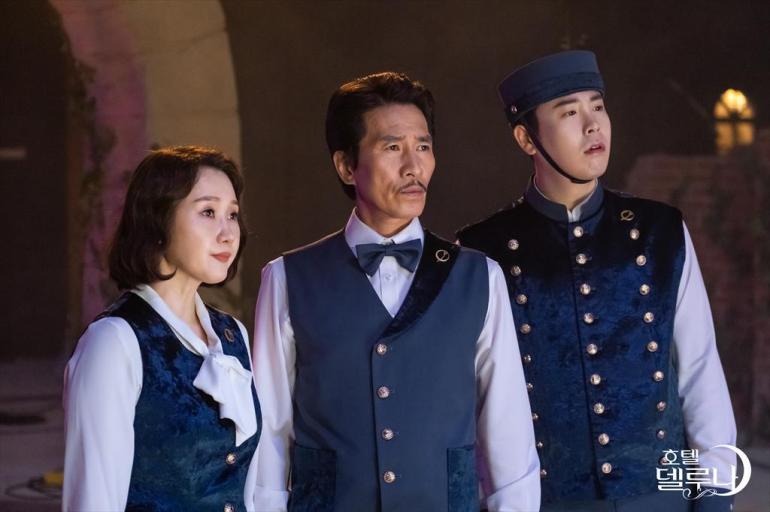 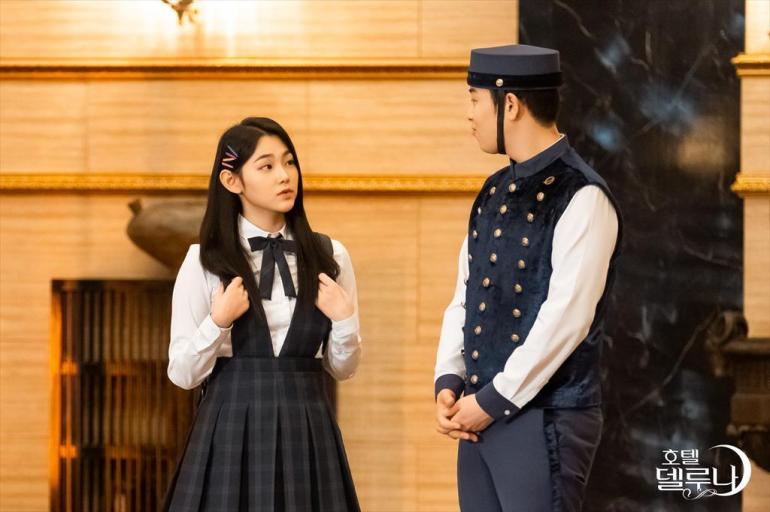 As much as I love the backstories of bar man Kim Sun-bi (Shin Jung-keun), head butler Choi Seo-hee (Bae Hae-sun), front desk man Ji Hyun-joong (PO), and intern Kim Yoo-na (Kang Mi-na), we can’t deny that they were there to make Man-weol reflect with her greatest resentment.

Although I have to question why they had to break the heart of Sanchez (Cho Hyun-chul), Chan-seong’s best friend and the purest character in this series. I was so excited to meet Veronica and they (SPOILER AHEAD) had to kill her. Like why?! I know, I know. It was to make Man-weol and Chan-seong realize how hard it was to be left behind. But still?! They could have just done it with a random spirit. Anyway, this is just a soft rant because Sanchez made me laugh and smile with his absurdity and innocence.

The whole present timeline in Hotel Del Luna could have been another ghost-fighting-themed drama if not for the chemistry of the whole cast and the strong main plotline. The progress with Man-weol’s redemption was evident in each episode.

In the middle of all the flashbacks and relationship upgrades, I realized that the ending for this series has been there all along. There was no asking what would happen it was just a question of when. I might have been in denial for a bit but I already know deep down that Man-weol have to go to the afterlife. It wasn’t the usual happy ending we get but it was indeed supposed to be a happy resolution for everyone. Man-weol and the rest of the Hotel Del Luna staff have been waiting for their moment to finally let go of their resentments and rest in peace (or in other religious belief be reincarnated in another life). 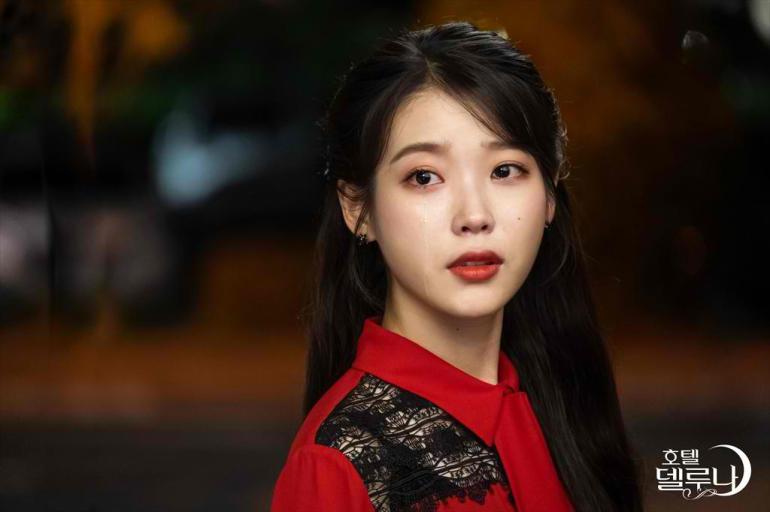 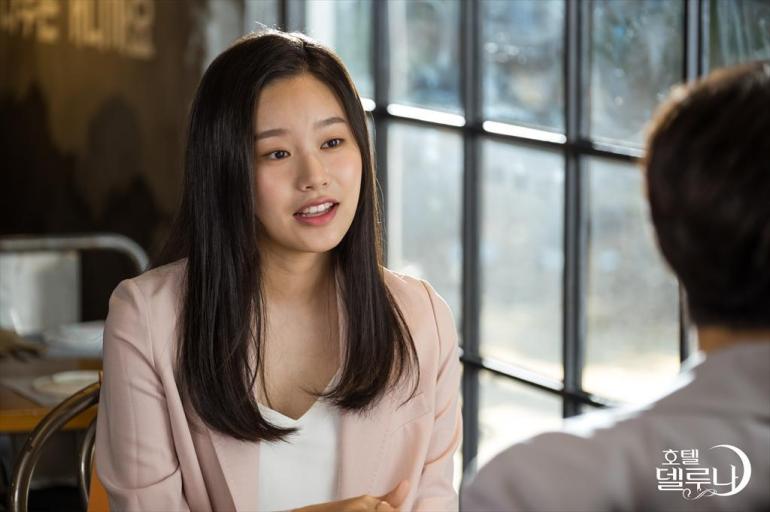 What came as a bit of a surprise was Chung-myung’s return. Ever since I saw Princess Song-hwa and Yeon-woo be reincarnated as Lee Mi-ra and Park Young-soo, I knew meeting Man-weol’s first love was inevitable. There was some confusion as to Chan-seong being Chung-myung’s reincarnation but in the end, it was revealed they were different characters. Their similarities were just mere coincidence. And the biggest plot twist in this series was Chung-myung never left Man-weol’s side for more than 1,300 years (!!!).

Their reunion was an emotional rollercoaster. Man-weol has been anticipating to see him again so she could eventually revenge her fallen friends. But when she finally faced her mean first love, she couldn’t do it. She wavered just like their last moment in the past. It could have been because Man-weol has learned that seeking revenge will not calm her angry heart at all. Before this meet-up, she already learned to let go all of her vengeful thought and forgive. She even let a new love enter her heart. 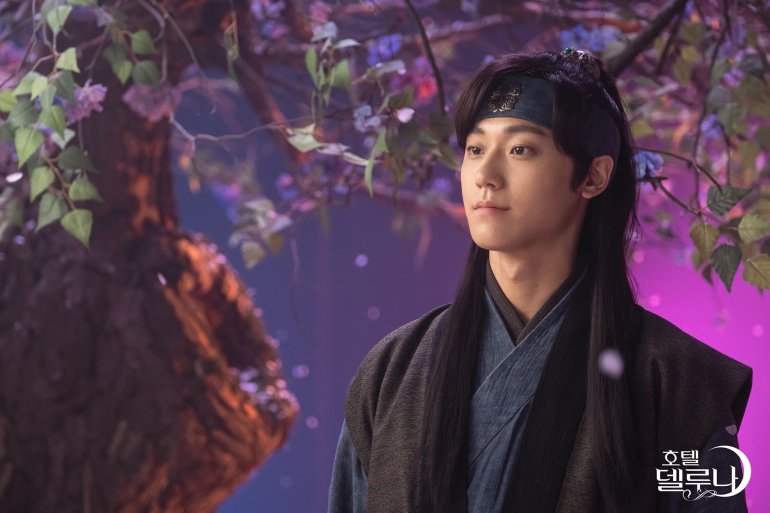 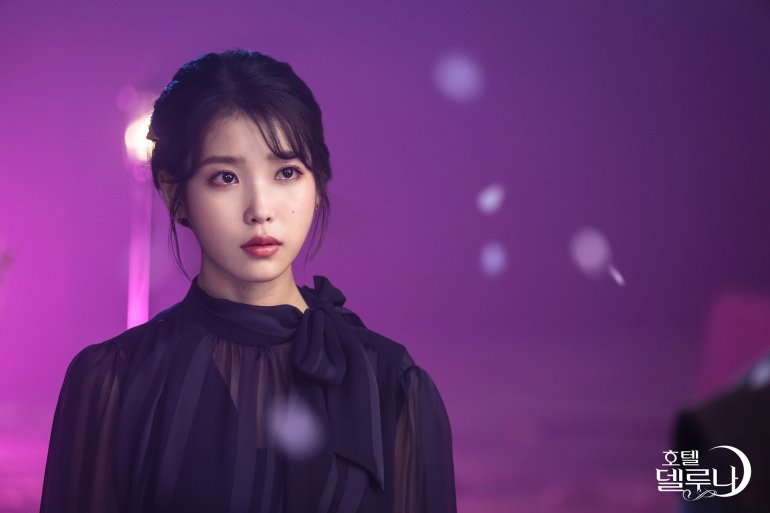 So when their confrontation scene finally happened, all I could see was Man-weol’s longing; not for them to be lovers again but longing for this person she wanted to see once again. She was ready to hear his side of the story. And even though I agree that the tragedy isn’t Chung-myung’s fault at all, he wasn’t that innocent. He could have just chosen to die and not sacrifice Man-weol’s beloved friends. Chung-myung has paid for his sins though. Man-weol saw his regret too. After all, Man-weol and Chung-myung have once been in love. It was a fact that they can’t change despite their disastrous ending. 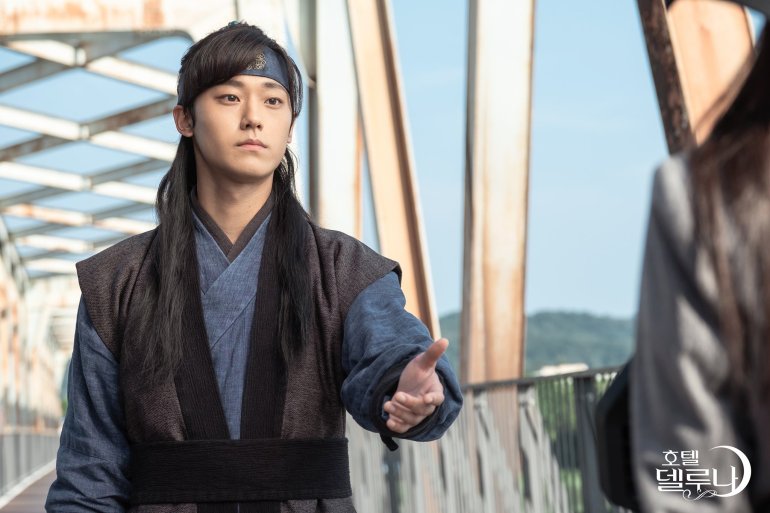 For this, Man-weol and Chung-myung have climbed up to my list of ill-fated-couples-that-broke-my-heart-into-pieces. Most of you were probably rooting for Chan-seong and Man-weol to end up together but I was hoping until the last minute that Man-weol would take Chung-myung’s hand and just cross the bridge with him. I just wanted them to stay together as long as possible but of course, Man-weol chose to go back and spend the rest of her time in the living realm for Chan-seong. 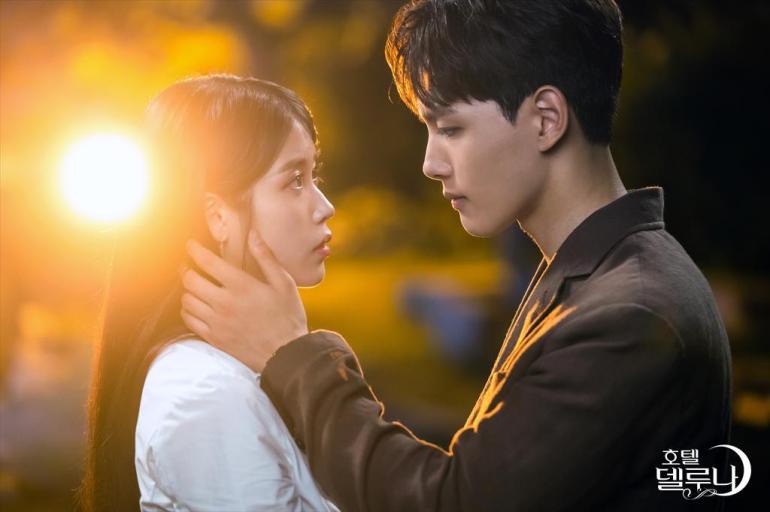 Unlike Goblin though, we didn’t see Man-weol being reincarnated with the series leaving us with just Chan-seong imagining the whole Hotel Del Luna family living in the contemporary timeline. It was indeed hard to watch but I can still consider this as a bittersweet ending. Maybe we could just all imagine Chan-seong seeing Man-weol’s reincarnated version in New York.

Hotel Del Luna is Jang Man-weol’s story. She is rightfully the strongest point of the whole series. Saying she’s a so-so character with a so-so story would be defamatory. One should look through her outlandish garbs and red lipstick to see the depth of her character. It was also clear from the start that this series isn’t a romance story at all (‘no HEA’ warning signs was all over the first half of the series!!!). The love component was there to stir Man-weol’s character from being a cynical thief to someone who experiences what life is all about. She learned the hard way that truly living means being open to feeling everything. Not just the happy emotions like love but also the heart-wrenching emotions like grief. 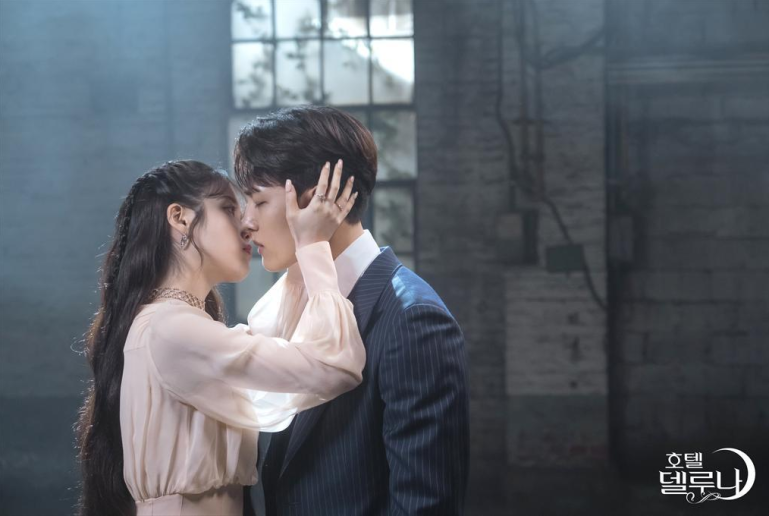 So to answer my question, Can Hotel Del Luna be as believable and unforgettable as its predecessors? Yes, there was no denying to this. The Hong Sisters embraced Jang Man-weol’s world and crafted a believable character whose resentment and redemption became an remarkable tale for all of us. 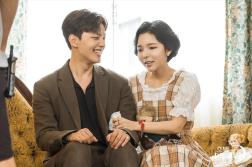 – If ever there would be a season 2 (which is unlikely) I would love to see Angel of Death (Kang Hong-suk) again! He could accompany Kim Soo-hyun!

-It’s understandable why this series’ OST topped the charts!

-I thought 2019 would pass without getting hanged up with a fictional character but Ko Chung-myung struck me with his second lead sword and left my heart bleeding. He’s not a perfect hero but still, their love story could have been a stand-alone sageuk.