“And if my wishes came true, it would’ve been you…”

Listening to Taylor Swift’s new album Folklore has made a lot of us vulnerable. Or were you the lucky ones who weren’t affected by her heart wrenching lyrical masterpieces? But if you’re like me whose heart was once again crushed into pieces by Tay’s new songs, there’s a high chance, memories (happy, mostly sad) came rushing in. Since real-life pain was tougher to handle, I chose to drown myself instead with fictional pain inflicted by some of the most heartbreaking albeit gentle rejection scenes from K-dramaland.

It’s paradoxical to say that a rejection could be sad yet beautiful, right? But it does exist. This kind of rejection was those uttered with the nicest of words but the end result was still the same: he/she doesn’t like you. Or at least like you enough to jump and fall into a much deeper and romantic relationship. It’s similar to the eye-roll-inducing breakup line “it’s not you, it’s me” but kinder and more genuine in my ears.

So here it is, I list down five K-drama scenes that still haunt all of my what-ifs.

The Saddest and Yet Most Beautiful Rejections

Chilbong: I don’t think I’ll be able to keep in touch with you in the future. I think it will take some time.

Na-jung: Jun-ah, out of all the people I know, you’re the most handsome. You’re very tall. You have a nice personality. Out of all the people I’ve met, you’re the most amazing. And that amazing man likes me. Do you know how grateful I am? Thanks to you, I realized that I’m a pretty and lovable girl. The fact that the most famous person in Korea likes me means I’m quite an amazing woman myself, right? Jun-ah, in the future, when I have a child, I’ll brag about it. I’ll brag to my child about how the famous star on TV had once liked me. I’m going to brag about it a lot. Jun-ah, thank you for liking me. Thanks to you, my 20s will be beautiful in my memories. 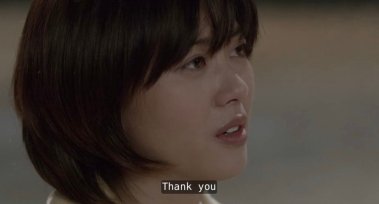 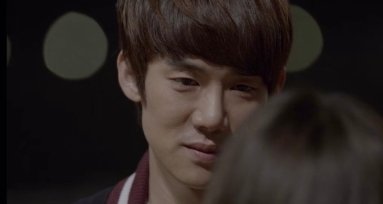 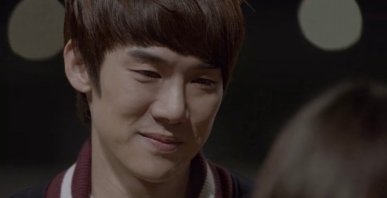 As I’ve said in my Flashback Session for Reply 1994, I knew from the start that Chilbong never had a chance with Na-jung. But this scene squeezed my heart until it bled dry. The moment Na-jung walked into the stadium, I knew right away that it’d be their final goodbye. Na-jung’s words put Chilbong on a high pedestal; a pedestal she never tried to reach. She tried to lift up Chilbong’s spirit but it hurt nonetheless. If I could, I would have jumped into that scene and hugged Chilbong myself. This lonely prince-like baseball superstar deserves all the love in the world.

“Look at this idiotic fool that you made me…”

Nam-gil: I don’t know what to make of you. But being with you makes me at ease. You make me feel like I’m a warm person. Now that I really like you, I finally realize where your heart is. I better tell you this now. I really like you a lot. I just want you to know that. You don’t even know that you’re pretty.

Jin-joo: Then am I your first love? It’s nice to be someone’s ‘first love’. It feels good to have someone who is rooting for you without even knowing it. You were like that to me before. And you’re still like that. Thank you, and I’m sorry.

Jin-joo’s words were similar to that of Na-jung’s. Jin-joo knew what an amazing guy Nam-gil is but it was her history with Ban-do that weighed more value in her heart. What makes this scene more heartbreaking was that it was Jin-joo’s second chance in life. She knew what happened in her future and their marriage but she still chose to be with Ban-do; staying loyal to their vows to stick with each other for richer and for poorer. Maybe, just maybe, in a parallel world, Nam-gil was also someone else’s first love.

“And when I break, it’s in a million pieces…”

Seok-hyeong to Ik-jun: I told her very respectfully that I’m not interested. Well, it’s been a while since she told me about her feelings. Min-ha told me that she was okay and she just wanted me to know how she felt. But how can I just ignore that? We’re working together at the hospital. I hate feeling awkward or uncomfortable while working so I met her outside the hospital and talked to her. I told her to meet a good guy instead of liking me. I told her that I don’t have time or energy to date, anyone, right now. I’m divorced. And my life is complicated right now. So instead of dating me, I told her to date someone better.

Ik-jun: Here’s another interpretation. If you weren’t divorced and weren’t in a complicated situation, you would have dated Chu Min-ha.

Seok-hyeong: No, I mean it. I’m really not interested in dating anyone right now. And I’ll probably stay this way. And obviously, I’m not really interested with Dr. Chu. I like being alone. My life is perfect now.

Ik-jun: Who do you have? I know that you have us. But if you have your family or loved ones with you, their mere existence can comfort you. Don’t rob yourself of those chances.

Seok-hyeong: I don’t want her to get hurt. She might get hurt because of me and my situation.

I loudly cheered for Chu Min-ha after her brave and straightforward confession to Mido and Falasol’s certified lovable bear-like member, Yang Seok-hyeong. That’s why I was hoping they would at least get some kind of a happy ending on the two-hour finale of Hospital Playlist. But nada, we only got Seok-hyeong narrating how he rejected our beloved Min-ha. Just like the first two scenes, I cried buckets during his conversation with Ik-jun. That dork, Ik-jun, said things that hit home. I understood where Seok-hyeong was coming from. His guard is up because of previous experiences. And sometimes, we think we’re better off alone but as Ik-jun said, we’re robbing ourselves of a chance to be loved by the right person. **cries in K-drama**

Romance is a Bonus Book – Letter to Hae-rin

“I gave so many signs. You didn’t even see the signs…”

Hae-rin,
I have read all the letters you left for me. So many thoughts crossed my mind. Should I define our relationship? Should I slowly put distance between us? I also questioned if that was the only way for you. No matter how hard I thought, I didn’t think that was the answer. Your feelings for me were beautiful and precious. So, I didn’t want to mistreat it. The woman I’ve known for three years is passionate, diligent, and beautiful. That is why you will find a better guy than me. Someone who recognizes you. Someone who makes you shine. Someone who makes you happy. At least, someone who won’t pretend not to know your feelings. I don’t want to remain as one of your boyfriends in your memory. I’ll be a great colleague to you instead. And I’ll wait. I’ll wait until you meet a nice boyfriend. Next to you, as a nice colleague. Thank you for everything, Jung Hae-rin. And for liking me. 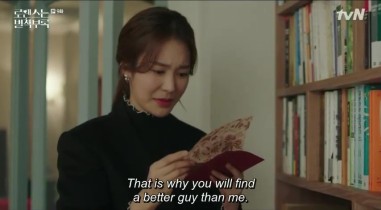 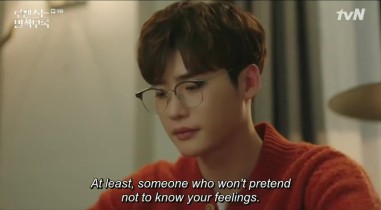 Hae-rin was friend zoned. There’s no getting around that truth. But Eun-ho made sure his beloved hoobae get the amount of respect for having feelings for him. His letter was thoughtful, beautiful, and sad all at the same time. I felt like he really considered how he would reject her in the least hurtful manner. What I love the most about this rejection scene was the sincerity in Eun-ho’s every word. It was painful for Hae-rin to know that she and Eun-ho couldn’t be more than friends but Eun-ho considered her as someone precious to him. And that he’d be really happy if Hae-rin would find someone – someone who would treat her better – to fall in love with. **crying intensifies**

It’s Okay To Not Be Okay – Uncomfortable Sunset

[Episode 5]
Gang-tae: Ju-ri, do you want to slap me once again? Because I feel like you’ll get upset in a little while. Don’t bother wasting your emotions on me. I don’t deserve any of that.
Ju-ri: Because you’re going to leave anyway? It doesn’t matter. Just let me keep liking you. That’s up to me. Do me a favor. I hope you don’t run away because you find me uncomfortable. If you do, it’ll make me feel really pathetic and sad.

The gorgeous sunset backdrop in this scene pictures the opposite of what occurred between them. Gang-tae was rejecting Ju-ri; and she knew it before he said a word. I also have a confession to make: I didn’t like Ju-ri at first. Because I thought she would be this annoying insistent two-faced second lead. But it turns out she’s just a girl, liking a boy, who she thought she knew better than anyone else. She might not understand Gang-tae’s pain but I think she’s willing to share it if given a chance. But she didn’t get that chance at all. He pushed her away just like everyone else who tried to come close.

“I just wanted you to know that this is me trying…”

I debated including this Winter Garden scene from Episode 8 of Hospital Playlist but after re-watching it, I realized I’m more infuriated than sad. Imagine how vulnerable Jang Gyeo-ul was in this scene only to be rejected by Ahn Jeong-won’s now-infamous Yangpyeong lie. I get it, he was trying to get away from his feelings but the fact remains that his lie hurt Gyeo-ul. Remember that if someone mustered up the courage to confess, they’re laying out their hearts in the open. They’re giving you the chance to decide what you’d do with it. And Andrea chose to stab her with a lie. Andrea, better make up for this blunder on season 2!

Despite the rejection, these K-drama characters were lucky to like someone who considered their feelings precious and beautiful. In real life, you’d either get seen-zoned or worst, sent-zoned by someone you tried to put effort noticing you. In real life, you’d just get ghosted after telling them your feelings. In real life, there were only a few people courageous enough to tell you straight to the face that they couldn’t reciprocate your feelings. And if real-life rejection would be too much for your weak heart, at least, these K-drama scenes (and every Taylor Swift sad songs) are here to give us a good cry when needed.

>>First Impression: It’s Okay To Not Be Okay