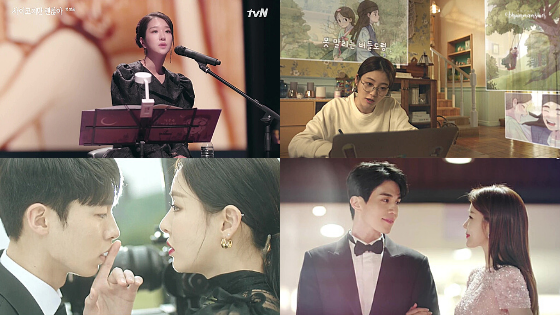 A story being told inside a story. We encounter such ‘stories’ in K-dramas from time to time. Sometimes, these inner stories will be part of an episode while some series has one or more in each episode; like a recurring theme that bonds the whole series together.

This literary device, which some called embedded narrative or nested stories, are those tales told by a character within a fictional story. Its purpose and value vary from simple additional entertainment to an important part of the actual narrative. Some K-dramas have inside stories that have their own complete plot while others only show snippets with vague plots.

To make it easier to grasp, here are some examples of how K-dramas used this technique.

Inside stories with a complete plot

Probably the most recent example is the fairytales/children stories told in each episode of It’s Okay To Not Be Okay. Some stories they use, like The Red Shoes and Rapunzel, are fairytales most of us are familiar with. IOTNBO also used original children’s books which were presented as its main character Ko Moon-young’s creation. Since IOTNBO is a character-driven series, they sometimes used those children’s tales to symbolically show inner conflicts and changes of the main characters; a representational narrative of the characters’ background stories and what was currently happening to them. The last story Moon-young wrote, Finding the Real Face, summarizes everything they went through the whole series. A perfect wrap-up for a K-drama that heavily anchored its narration to its accompanying tales.

Another recent example of a story within a story that has significant value for the main plot is Kim Sol-ah’s webcomic, Beodeul Love, in Meow: The Secret Boy. Like Moon-young, she’s also the creator of the comic so it also reflected what was happening to her in real life. Of course, the webcomic wasn’t a direct biography of her life but she somehow managed to insert her own woes and character development in the online story. In the end, we saw that Sol-ah’s webcomic was not about a girl and her first love anymore. It was about the girl herself and her journey to find happiness in the most unexpected place and unexpected beings.

Inside stories that didn’t have a complete plot

One of my favorite scenes in Search WWW was when Cha Hyun accompanied Seol Ji-hwan during one of his shoots for What’s Wrong with My Mother in Law. Heart fluttering things happened there but what I wanted to highlight is Ji-hwan’s daily drama. It’s an inside story that was told only in snippets. We only watched a few seconds of it during Cha Hyun’s secret drama watching habit and through Ji-hwan’s shootings. But it doesn’t really matter that we didn’t get the whole complete makjang plot. This inside story was just used to connect and progress the loveline between Cha Hyun and Ji-hwan. And inside stories can really be used like that most of the time.

A similar example is Oh Yoon-seo’s legal drama Love Hurts in Touch Your Heart. I couldn’t even recall what the inside story was about. All I could remember was Yoon-seo went to great lengths to get the main role for that series. Just like in Search: WWW, they used that inside story as a way/excuse to intertwine the two seemingly different worlds of Oh Yoon-seo and Kwon Joong-rok.

Frame stories are the variation we often read in fairytales or classic novels we grew up with. Unlike the two examples above, the main plot is itself a story within a story.

The first thing that comes to mind that used this type of narrative execution is Lovers in Paris. I know, I know it’s really not the best example because it was only during the ending that we discovered that the main story was a manuscript written by the female character herself Gang Tae-young. It was a downer of a plot twist, to be honest, but yep, it’s an example of a frame story.

Another series that has the main story being told in another story is Extraordinary You. Eun Dan-o was just an extra existing in the manhwa entitled Secret. But since she’s a spunky character, she decided to create her own story. Secret set the stage in which we watched the story of Dan-o and Ha-roo took place.

A story within a story is always a fascinating technique for me especially those that have complete plots and own set of characters. It always felt like receiving two presents even though you only asked for one. Which inside stories in K-drama is your favorite?