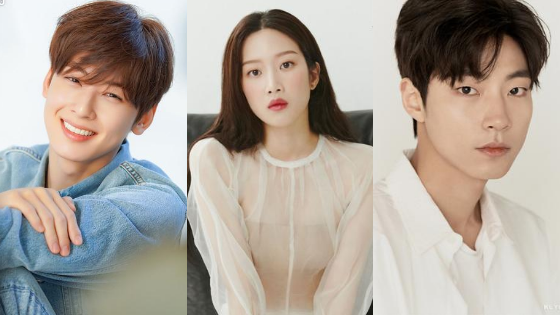 ASTRO’s Cha Eun-woo (Rookie Historian Goo Hae-ryung), Moon Ga-young (Find Me in Your Memory), and Hwang In-yeob (Tale of Nokdu) have been confirmed as the lead cast of the upcoming drama adaptation of the hit webtoon “True Beauty.”

The drama is based on the webcomic “Yeoshingangrim” by Yaongyi that was published in 2018 by Naver Webtoon Company. It is a romantic comedy that revolves around the life of Im Joo-kyung, a high school student who has an inferiority complex about her appearance and gains self-confidence through makeup.

Moon Ga-young will play the lead character Im Joo-kyung, a cheerful and pretty girl at Saebom High School who hides her true face from the public.

Cha Eun-woo will play as the male lead Lee Soo-ho, a handsome and intelligent student who also plays great basketball in school. He is very popular among the school population but he is cold and stoic with others. He hides a deep emotional wound and will eventually grow close with Im Joo-kyung.

Hwang In-yeob will take on the role of Han Seo-joon, another handsome student with broad shoulders and long legs. He may seem rude to others, but he is really caring and protective.

Park Yoo-na is also in talks for the role of Kang Soo-jin, the perfect “IT” girl of Saebom High School who also hides about her abusive family.

The drama version will be directed by PD Kim Sang-hyub (Extraordinary You) and written by Lee Si-eun (Rude Miss Young Ae).