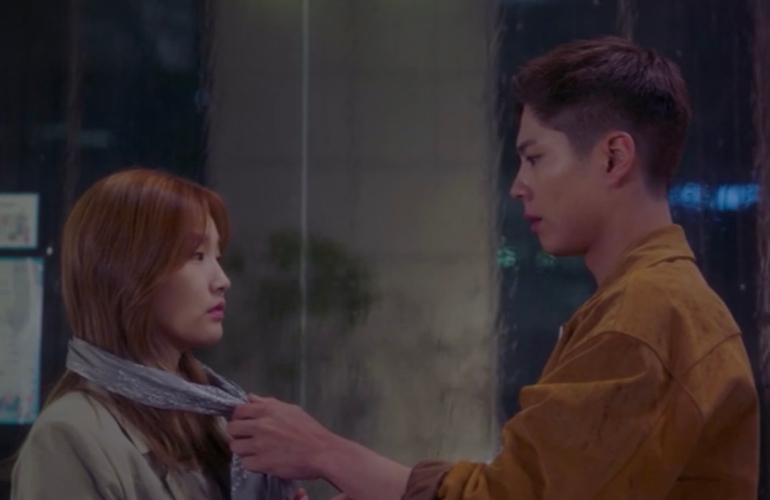 We’re just in the second week but I’m already attached to Sa Hye-jun and Ahn Jeong-ha!

“My self-esteem has hit rock bottom,” Sa Hye-jun (Park Bo-gum) admitted to Won Hae-hyo (Byeon Woo-seok) during the opening scene. His statement set-up the conflict the main characters’ had to face for the rest of the episodes this week. Hye-jun had it enough. He was at his lowest of low but he doesn’t quite seem to give up his wild dream. And so, he sought temporary escape with his newfound friend – Ahn Jeong-ha (Park So-dam).

I can listen to Jeong-ha and Hye-jun talk all day. I’m really fond of their conversations, especially Jeong-ha’s candor. And I think Hye-jun will agree with me. Jeong-ha’s presence allowed Hye-jun to say what’s on his mind. It’s freeing for him since he can’t do that with his family because they wouldn’t listen to his worries. His best friend, meanwhile, is his current source of insecurity. He can’t quite help compare his reality to Hye-hyo but with Jeong-ha, it seems like he is enough.

It’s the same for Jeong-ha. Spending time with Hye-jun seems like a momentary reprieve from her reality. She’s confident and has a stable mentality about her life but somehow, it feels like she’s hiding something. It’s probably because we haven’t known her yet like how we know everything about Hye-jun. We know little of her personal life. We don’t know yet why she left her corporate life to become a make-up artist, why she was living alone, and why she seems so guarded. And most of the time, jaded people have tragic stories they don’t want anyone to know. That’s why they are always careful not to cross the line. Jeong-ha’s denying it, but Hye-jun is already too close for her to push away.

“Sometimes losing is winning. Which means, you won,” a message Hye-jun sent to comfort Jeong-ha. I sometimes feel like Hye-jun’s advice to Jeong-ha are the same words he wants to hear himself. Unlike Jeong-ha who can compartmentalize her thoughts on her own, Hye-jun needs an external push to help him sort things out.

Good thing, he’s surrounded by a lot of good people. His halboji has always been his cheerleader. And now, he also has Jjampong Entertainment CEO (haha, it happened!)  Lee Min-jae (Shin Dong-mi) to slap some sense into him. She’s brutally honest and her words are what Hye-jun needs to hear. She’s totally right. Hye-jun is obviously giving up because the path he chose wasn’t as flowery as he thought it would be. It’s not a bad thing to want a “simple life” but as Min-jae noona said, he should exhaust all possibilities before he really gives up. And the thing I like the most with her pep talk was when she told him that not everyone should traverse the same path to reach their dreams.

Speaking of finding their own paths, Hae-hyo still seems to be unaware of how his mother’s efforts to help him gain popularity. It’s still a non-issue at the moment but I’m already anxious about how it would affect his self-confidence. It will definitely be a blow on his ego. But for now, he’s still a quite charming character who I hope will not be a villain in the end. I’m liking how supportive he is for Hey-jun and also the way he also treated Jeong-ha. I’m sure Hae-hyo’s interest to Jeong-ha is because of plain amusement but I wonder if he’ll develop something deeper in the future. Anyway, I know he meant well by standing up for Jeong-ha against the salon bully Jin-ju (Jo Ji-seung) but this is like the classic “stupid things K-drama male lead do that make the female lead’s life worst.”

I and my squad were wondering why the seemingly simple scenes with Jeong-ha and Hye-jun made our hearts go pit-a-pat like crazy. Then we realized it’s because Jeong-ha is living our secret fangirl dreams of spending time with our ultimate biases. I couldn’t agree more when Jeong-ha confessed that fangirling has been therapeutic for her. And there goes again the sad smile that sometimes slips out of her cheerful mask. There’s something really melancholic about Jeong-ha and I wish Hye-jun can make her open up more. But that would be a difficult task because Jeong-ha, as I’ve said, is too guarded for her own good.

Another character I wish will open up more is Hye-jun’s father, Sa Yeong-nam (Park Soo-young). He definitely loves Hye-jun but he should change his way of showing that fatherly love. I get his point but I’m on Team Eomma on this. Han Ae-suk (Ha Hee-ra) is right for saying Hye-jun aboji is being too harsh to his son and that it’s too much for Hye-jun since he already has to face harsh criticism for other people. Unlike Hye-jun’s father though, Hae-hyo’s mother was too protective and supportive to her son. To the point that I felt like Hae-hyo would feel suffocated by it soon. Remember, too much of anything is good for nothing.

Sa Hye-jun was finally in it to win it. Of course, he didn’t totally change overnight but he finally realized that he has to be more competitive if he wants to succeed. He needs to take his perseverance a notch higher. Once again, Min-jae CEO-nim’s pep talk was enough for him to realize that. But I also like how Hye-jun stood by his values. There are, of course, things one shouldn’t compromise and I really like it about him.

There was also an obvious shift in Hye-jun’s relationship with Hae-hyo and Jeong-ha. Hae-hyo pointed out that Hye-jun hasn’t been telling him stuff these days. I’m quite worried about their friendship but hopefully, they have a strong enough foundation to get through this inevitable change. Hye-jun and Jeong-ha, meanwhile, are probably not on the same page. I feel like Hye-jun is entertaining the possibility of liking Jeong-ha in a romantic way but Jeong-ha is one “realistic” woman. She already said it, “when fantasy and reality crash, it could be messy.” I don’t think she would let herself fall for Hye-jun that easily. She would probably try her best to stop her feelings from growing. And well, Hae-hyo is right, it’ll be fun to see that mess.

This is becoming more and more like Sa Hye-jun’s story more than anything else. The stories of people around him feel like they are being told through his eyes (if this was a novel, I think it would have been written in third person limited point-of-view). But that doesn’t mean the other stories – including family dramas – aren’t as endearing as our main hero. In fact, Ahn Jeong-ha is becoming my favorite character this year. The story arcs of Hye-jun’s friends are also interesting enough. The stories of the two families – Hye-jun’s and Hae-hyo’s – found its balance of giving us touching moments and well, humorous relief by mirroring real family dynamics. But at the center of all this is Hye-jun. And that is definitely not a bad thing.

-Okay, I’ve decided to use “Ahn” instead

-For the second consecutive week, why do K-drama female leads don’t own an umbrella? Like seriously why?

-But my pluviophile heart is happy

-So, this is one of Hye-jun’s exes

-This would be their thing, I swear.

-I hate this bully

-If you want to see more of this dangerous vibe from Bogum then you should watch Hello Monster!