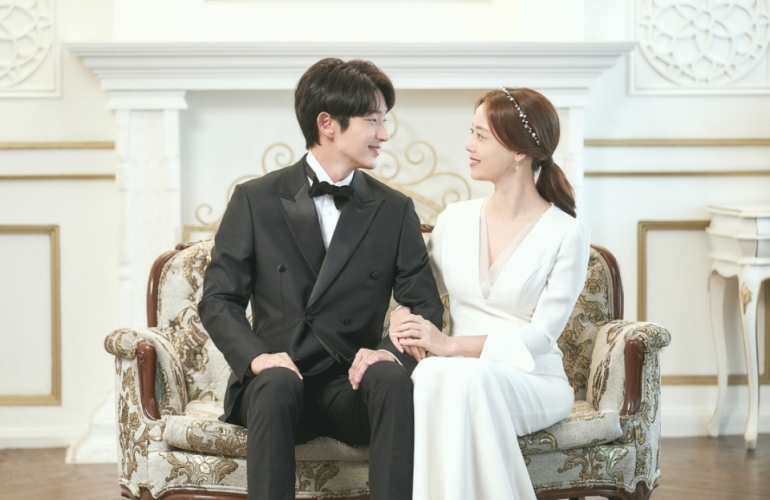 “The cruel truth that shakes the perfect trust.”

This was the quote written in the main poster of drama. At first, I thought it’s about Do Hyun-su pretending to be Baek Hee-sung to hide his past identity. But when Cha Ji-won learned the truth, no trust was broken between them. The trust even made them stronger. So as I look back into this same quote, I wonder what does it really mean? What was the cruel truth that would shake the perfect trust? Then again, we fast forward to the final episode, and then I realized something about Hyun-su and Ji-won’s relationship. The “perfect trust” meant by this quote was Hyun-su himself – his perfectly curated cover-up life… an identity built on his own wall. Hyun-su literally learned to trust slowly in the process. Day by day, he fights himself, doubts himself, and finally, trusts himself. But the cruel truth remains still. He is Do Min-seok’s son. He fakes identity and deceives his wife and child. He borrows the life of another person and he doesn’t deserve to be forgiven. It’s the undeniable truth that will forever shake his already fragile self-worth.

The Anti-hero and the Heroine

I know there’s been a long discussion about the route taken by the drama in its final episode. After Hyun-su was shot by Hee-sung, he woke up after a month without the memories of the past 15 years. He thought he woke up from the car accident! I actually discussed this with the @ahjummamshies squad and @busyahjussi (who is a Kim Ji-hoon stan btw) and @unicaahjumma got some good points from them. I genuinely didn’t mind the amnesia plot even though it’s overused in dramas already. I thought they made a tasteful take on Hyun-su’s temporary amnesia. It’s a good way of letting Hyun-su look back on his old life without the Hee-sung parts. He was the scarred boy from the countryside who’s father was a murderer. He was the heroic brother who took all the blame for his sister’s crime. He is the neighborhood kid who was bullied by rumormongers. It may be painful for Hyun-su to revisit those parts of his life as if it just happened yesterday, but it’s needed for him to rediscover who he really is – without the help of Ji-won. The show didn’t go full-on amnesia mode, though. Hyun-su still remembers snippets of his life as Hee-sung – his hand can’t function well without his wedding ring (which is super sweet I must say); he keeps on buying egg tarts whenever he passes by a shop (I cried here ok); and lastly, he keeps on thinking about Ji-won. All these things made me forgive the amnesia route.

But let me tackle briefly @busyahjussi’s point. The drama was about Hyun-su’s journey to self-discovery. He slowly discovered his capability of having sincere emotions. He learned that he also knew how to genuinely care for another person. But then the amnesia happened and he’s back to square one. He started doubting himself again. It would have been better if he closed the Hee-sung chapter of his life with awareness and not clouded by amnesia. One more thing, Hyun-su should feel the rewards of all his sacrifices wholeheartedly. He tried to protect Ji-won and Eun-ha at all costs because he finally realized his love for them was real. He was once a no-namer with a fake family name. He didn’t have a personality but he had Ji-won and Eun-ha. But even that character development was taken away from him by the amnesia.

Also sharing @unicaahjumma‘s take on the finale. The amnesia took away the chance for Hyun-su to feel complete victory. He should have been given the proper closure for those two painful chapters of his life – his teenage years as a son of a serial killer and the fake Hee-sung life. It would have created a better impact for the viewers, instead of bidding goodbye to those experiences because of memory loss. Also, I emphatize with Ji-won. Until the finale, it felt like she was always on the losing end. She was “used” by her husband as a cover-up for his fake identity and just when Hyun-su finally admitted his sincere love for Ji-won, he forgot her. Ji-won’s character seemed to always be shortchanged which was cruel, even though the drama ended on a happy note.

How about you? What’s your take on the amnesia route?

Where the morning star shines

Overall, this drama is a masterpiece. It’s one of the best drama thrillers I have watched. It kept me interested from start to finish, which is rare because sometimes we all figured out what will happen next by the time we reach a drama’s second half. The main actors – Lee Joon-gi, Moon Chae-won, Kim Ji-hoon, Jang Hee-jin – were all amazing and deserving of all the praise. Kim Ji-hoon pretty much slept through the first half of the series but man, the moment he woke up until his last appearance, he was memorable!

Another scene-stealer in this drama is of course our little egg tart, Eun-ha! To be honest, I didn’t cry in most of the heavy scenes between Hyun-su and Ji-won, but when I saw those egg tarts in Moo-jin’s refrigerator, I couldn’t bear it. I really felt the love of Hyun-su for his daughter. All Eun-ha scenes were heart-wrenching in this finale. She deliberately avoided drawing her father because she doesn’t want to see her mother crying anymore. She asked her mother if they are divorced because her classmates are teasing her about her new name Cha Eun-ha. We may think that all this took a heavy toll on Hyun-su and Ji-won only, but the real trauma was on their daughter. I can’t imagine the confusion that the child had to go through because of her parent’s mess!

I’m also happy with how they ended Hae-su’s arc. She finally got her chance at a fresh start with her much deserved peace of mind. Though I’m sad for Moo-jin, it’s just so refreshing to see Hae-su stand on her own without the guilt haunting her.

It feels good to end this series knowing both Hae-su and Hyun-su are beginning to find their real happiness. The Do siblings have been through hell and back! Can we get a new season just watching them live a happy life? I’m looking forward to that family meal together!

Lastly, mad props to Moon Chae-won for her portrayal of Detective Cha Ji-won! One of 2020’s best female lead characters! I felt her dedication as a wife and mother, but most of all, her sincerity to stay by Hyun-su’s side no matter what happens. She is indeed her husband’s morning star.

🥀 Hee-sung is definitely the bias wrecker in this drama. I’m supposed to hate you oppa but I just can’t!???? Serial killer who?

🥀 I admit I didn’t like how they just killed Hee-sung like that. It’s not that I want any redemption arc for him, but dying is just an easy way out to pay for his crimes.

🥀 Speaking of Hee-sung’s crimes, we really ended the drama without letting Do Min-seok’s children knowing the truth that their dad was killed by Hee-sung? He didn’t even deserve that big reveal?

🥀 I admit I was surprised to see that Mom was the one who ended up in prison while Dad ended up losing his sanity. Maybe Mom handled all the mental and emotional stress way better than Dad.

🥀 I live for Lee Joon-gi and Kim Ji-hoon’s bromance behind the scenes!

🥀 Time to say goodbye to my favorite 2020 suspense thriller! Flower of Evil team, you all did great! Thank you for giving us a memorable drama!