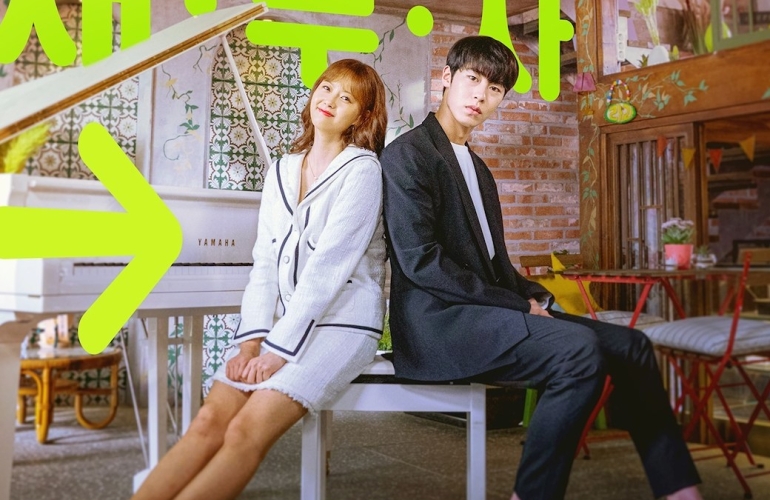 Spoiled and bubbly pianist hits rock bottom after her family suffered bankruptcy. In an attempt to make a fresh start in a countryside small village, she crosses paths again with a free-spirited acquaintance.

Major trope: Fish out of the water

My baby boy in his first legit leading man role… What more can I say? LOL. A regular reader of this blog would know my fangirl love for this cutie. So here’s my very biased initial reaction to one of my most awaited dramas of 2020. 😉

Honestly, this feels close to When The Weather is Fine with main character sketches from Shopaholic Louis. I know the title and the promos made it seem like a musical drama, and it really tries to be in some scenes and script, but this one is a full-blown rom-com with just music elements in it. I hope it stays this way though as I would not like it to be compared with Do You Like Brahms? because that other drama is really having positive reviews nowadays. Let’s try to make it a fun watch, right, show?

In the first two episodes, we got a backstory to the life of the main heroine, Goo La-la (Go Ara) and her adorable white pup Mimi. La-la’s mother passed away when she was still a baby and her loving father raised her alone. In a very funny circumstance, her father sealed her fate by enrolling her to piano lessons at such a young age. She isn’t an inborn pianist but because of a heart-melting incident, she decided to be better so she can play for her father. Long story short, she was able to play the piece for her father at her graduation recital. And then she quit. LOL

I liked how La-la’s life revolved around her father but she didn’t grow up as a spoiled brat. I thought she’s going to be a sheltered bitch who wasted all her living allowances in unnecessary purchases. Well, she still makes those unnecessary purchases (and even got scammed eventually), but I can forgive her because she’s a genuinely nice character.

I didn’t really pick up enough background info on Sunwoo Jun (Lee Jae-wook) during their promo days. All I knew was that he’s a “cold on the outside but soft on the inside” type of character who does many part-time jobs. But after watching the first two episodes, I think he would be the average K-drama boy who rebels from his rich family and hides his identity.

Going back to the story, La-la’s father arranged her to be married to a doctor named Bang Jeong-nam (Moon Tae-yoo). We all know she wasn’t gonna end up with him after he was dragged out from the altar on their wedding day so I was surprised to see more of him and his gold digging mom (Jeon Su-kyeong) in the second episode. La-la’s father died right before making it to her wedding, leaving her orphaned and penniless.

Jun met La-la while she was at the waiting lounge before the wedding. I thought this was a first love romance because of how Jun reacted when he saw her but let’s talk about that later. Let’s talk about how hot he is as a nonchalant construction worker first. I honestly didn’t mind all that dirt on his face! How can he be so perfect and charming in rag clothes????

All we know about Jun based from the first two episodes was that he’s running away from his rich family and his mom’s goons are on the lookout for him. His mom is freaking out because his dad doesn’t know about any of this and Jun is always anxious about the possibility of his true identity being revealed to the world. Nobody in Eunpo City knows who he is but at least he uses his real name, right?

Jun and La-la stumble upon each other again in Eunpo City when La-la decided to meet a mysterious commenter on her SNS. Jun has been living in Eunpo City for a month now. The road accident made La-la owe Jun some money and this was used as a plot device for the OTP to live closer to each other. I only have one theory here: Based from the cliffhanger in Episode 2, a still unrevealed person was watching La-la’s graduation recital from the balcony. We only saw the man’s back but I can definitely say it’s Jun. He knew who she was from the very beginning, and that she was his first love. That’s why he was caught off guard when he saw her in a wedding dress. Am I right or am I interpreting things too much?

As I said earlier, this feels like Shopaholic Louis, maybe because I see Louis in La-la. She lost her safety net all of a sudden, and now, she’s homeless. She needs to figure out the real world on her own and rebuild her life back from scratch. And then, while she’s on rock bottom, she potentially finds love and hope in the form of Jun. Same formula, but I LOVE IT. I trust the writer in this one because I liked how Shopaholic Louis so much. It was not a perfect drama but it worked. And it’s all that matters.

🎵 I like how K-dramas now are more open to female chaebols who are living THE life. I’m so done with b-rolls of rich men in suits and their lavish daily routines. Also, I want to be Mimi in my next life.

🎵 Our girl La-la is an optimistic survivor.

🎵 Lee Jae-wook’s favorite mode of transportation this 2020: bicycle 🚲 Bike scenes are my weakness! Rooting for this OTP already ❤

🎵 Thankfully, this drama is just light and unassuming because I asked for refreshing ones after watching Flower of Evil and Stranger 2 at the same time. Those 3Q dramas were very unforgiving for my weak heart. May all 4Q dramas be fluffy and sweet only, yes?