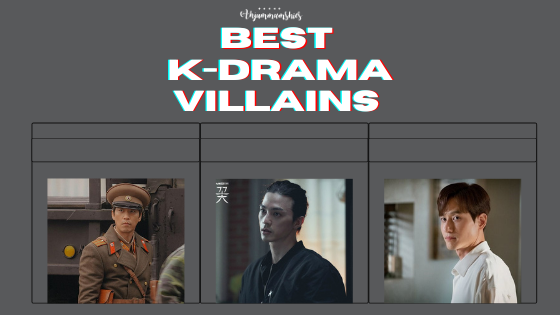 We always just focus on the heroes/heroines in dramaland that we often overlook what makes their story exciting in the first place. The following characters have most probably made you fume in anger and frustrate you to no end with their evil plotting and a devilish mind. Without further ado, we give you our favorite villains from K-dramas this 2020.

Crash Landing on You wouldn’t be a thrill to watch without its very effective villain, Cho Cheol-gang. He’s that persistent vengeful villain who our hero, Captain Ri Jeong-hyeok (Hyun Bin) can’t seem to beat no matter which side of the border he is. That final action scene with him really kept me on the edge of my seat. And for that, I would like to acknowledge how good of an actor Oh Man-seok is. He could really play any role in any medium; be it on television, movie, or theatre.

Another persistent villain this year is TKEM’s Lee Lim. If Cho Cheol-gang is willing to chase Captain Ri on the other side of the border, well, Lee Lim took this challenge to another level. He would eagerly follow his royal nephew Lee Gon (Lee Min-ho) to every corner of the universe. What’s mind-blowing about his evil plotting was that he was willing to kill himself so he could take over the thrown. If that’s not a top-notch villain trait, then I don’t know what is.

The Jang Dae-hee from Itaewon Class is quite different from my first two choices. In IC, it was the hero – Park Saeroyi – who was much more persistent than the villain itself. However, that doesn’t mean Chairman Jang is an ineffective villain. He’s in fact one of the key elements that made this series an exciting weekly watch.

If there’s one serial killer I’d like to meet, it’s Baek Hee-sung. Aside from being a hot long-haired sangnamja (thanks to the oozing appeal of Kim Ji-hoon), Baek Hee-sung’s nature as the villain is a bit twisted and fancy. He was once a murderer’s protégé, before he escaped death himself and slept for more than a decade. He sees killing as a game that you have to solve or else you’ll die. He sees murder as a form of entertainment, and he keeps his victims fingernails as souvenirs! It’s also the first time that I saw a hero chase a serial killer and not the other way around. LOL.

One of scariest villains this 2020 who all gave us nightmares was definitely Moon-young’s mother Do Hui-jae. Those creepy flashbacks depicted how Moon-young’s mother shaped her childhood with painful memories. She even killed a person without remorse! I just couldn’t ignore all the investments she did throughout the years just to execute her plans. Even the length she went through – her face, voice, and overall disguise as the Head Nurse Park (Jang Young-nam) – while I may not agree with the execution all in all, I still feel the need to recognize Woo Jung-won for such an unforgettable performance.

Lee Tae-oh (Park Hae-joon) – The World of the Married

Park Hae-joon brought the jerkiness of cheating men to another level when he played the remorseless Lee Tae-oh in TWOTM. Why in the world does a two-timing husband feel wronged and have the audacity to take revenge against the wife he fooled and destroyed? Lee Tae-oh completely embodies how men could have such huge ego and yet so fragile. Selfish, self-serving and just craaaaazy. Grow up little boys. I’m not Dr. Ji Sun-woo, by the way. Lol.

Kim Ji-hoon proved everyone that you don’t need too many screen time nor too many lines to deliver a memorable performance. Psycopath Baek Hee-sung delivered all the chills with his unsettling stares, nail-biting antics (but damn he’s so beautiful) and his unending thirst to kill his preys. He even talked about murdering people in front of his mother like it was something like walking at a park. I would love to meet Kim Ji-hoon IRL but can he not tie his hair up?

They say the scariest creatures in the world are not the supernatural like ghosts or monsters, but the seemingly normal individuals with murderous desire. Yes, I only made that one up lols but it’s the best way the type of evil Do Hui-jae is. Manipulative, calculating and scheming, who would have thought that the doting nurse we all loved turned out to be our drama heroine’s worst nightmare. Do Hui-jae is one of the villains whose facial expressions could send all the chills inside your spine, thanks to the competent performance by acting veteran Jang Young-nam. The actress did a marvelous portrayal of the two-faced psycopath, dropping the most subtle brow and lip twitches to convey suppressed anger at one time and giving ‘over-the-top’ laughter and high pitched speech to unleash her wrath, at another.