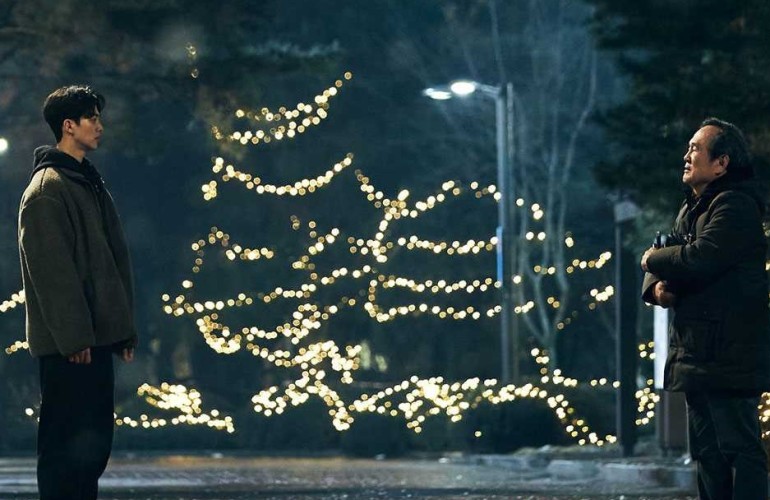 On my First Impression for Navillera, I’ve said that everyone will be able to find a character that they can relate to in this series. I wrote this because it’s really common for an audience of a character-driven series like this to find someone that speaks to them on a very personal level. I was expecting that to happen to me in this 12-episode series. I also expected that this would be a tearjerker but I never realized that the whole experience will be this cathartic.

There’s cry fest in every episode. I think, most of us would agree that we – the audience – probably shed more tears than the actors themselves (haha). I’m not over-exaggerating when I say, I’ve cried even on scenes that weren’t supposed to be that dramatic. I mean, I was bawling at a simple family meeting during episode 11 when the characters in the scenes weren’t even being emotional. I think that’s because of the series’ strongest core: its main protagonist Shim Deok-chul (Park In-hwan). The series revolves around him, his love for ballet, and the people he met in this one last attempt at his long-lost dreams. Deok-chul haraboji (if I may fondly call him that) has touched the hearts and soul of every other character we’ve met in this series.

On the top of Deok-chul’s list of people he helped is Lee Chae-rok (Song Kang). A ballet dancer struggling to improve his skills because he’s distracted by his personal woes. His coach Ki Seung-joo (Kim Tae-hoon) pointed out in the premiere episode that he took him in as a student because he saw that he was following his emotions with every movement. He was supposed to be dancing with his heart. Somewhere along the way, he lost that spark, and Coach Seung-joo couldn’t understand why. But as the story progresses and Deok-chul slowly enters Chae-rok’s life, we discovered why he seems out of focus with his ballet. Chae-rok’s past has been haunting him and is threatening to stop him from soaring in his newfound life. With Deok-chul, however, Chae-rok was able to open up his heart again to people.

From the grumpy ballet dancer to someone with a renewed passion for dancing, we’ve watched Chae-rok grow as he became closer to Deok-chul. Their relationship gave us adorable ballet dance lessons, reflective conversations, and heartfelt performances. I know everyone’s in love with their finale conversation. It’s beautiful, I get it. It deserves everyone’s attention. But my favorite scene between this two will always be the scene on episode 7-8, where Chae-rok danced in front of Deok-chul haraboji to make him recover his senses. I think it was at that point that Chae-rok regained his passion for ballet. He knew now that his fluid movements can touch someone else’s heart and life and he couldn’t just make jumps just because he could. Ballet, for him, isn’t just about being technically correct about posture, plié , and sauté. Ballet for Chae-rok is his source of happiness. And he, too, knows it is the same for Deok-chul haraboji. That’s why he tried his best to wake him up with his dance. Watching that whole scene has put me into a forlorn trance and dug a well of tears. It looks magical. And like any spell, it is just temporary. Deok-chul’s condition worsens after that scene; proof that the series still sticks to the sad reality of his condition despite its hopeful theme.

During the scene I’ve mentioned, another character was watching them – Yang Ho-beom (Kim Kwon). I thought at first, Ho-beom was just there as a mere antagonist and tension maker for Chae-rok’s character arc. I eventually learned though that he would also be touched by Deok-chul haraboji’s profound words. I love how Deok-chul has able to change Ho-beom’s mind without being too imposing. Young adult like him doesn’t like to be push or nag around. But Deok-chul was able to stir him towards a much better life path. His character arc reminds me of “The Story of the Chained Elephant.” Just like the strong elephant in that children’s story, Ho-beom let himself be shackled by his past experience. He let that experience define himself. His encounter with Deok-chul made him realize that he is strong enough to let himself free of that invisible chain. One of the things Deok-chul told him was “I’m just saying you still have time. If it was too late, you wouldn’t even be in this dilemma.” These are just some simple phrases but since it was said to someone who badly needed to hear it, it became a powerful push for Ho-beom. And his character’s ending? That’s one of the many things I appreciate with this series – every character evolved into a better version of themselves.

Speaking of my favorite thing about this series, I’ve become attached with the whole Shim Family (including Chae-rok, of course!) by the end of episode 12.

I love it that Choi Hae-nam was played by everyone’s favorite ‘granny’ Na Moon-hee. Because they were able to show us the depth of emotions only experienced actors could get right. It’s easy for them to become one with their current characters no matter how iconic their previous roles were. And that’s what I needed to see with Deok-chul and Hae-nam’s relationship. Whenever Deok-chul is with her, we saw a different kind of person. He becomes a husband who truly loves and respects his wife. The kind of long-lasting love every K-drama couple out there would be jealous of. They understand each other to the core. And they really stick together through thick and thin. You think Deok-chul’s alzheirmer’s is a big ordeal for them? Nope, they’ve been through harder times before. As Deok-chul said: “This will pass. It’s something my life has taught me. All kinds of things have happened but I barely remember anything. They’re all in the past.”

One of the best moments in this drama, for me, is when Hae-nam reprimanded their eldest son Shim Seong-san (Jung Hae-kyun). I actually hated his character at first. He seems to be a perfectionist workaholic who wants everyone to act according to his standard. But I ended up liking this character. Seong-san, apparently, is just misunderstood. He has this oldest child syndrome where he thinks he’s the only one suffering and sacrificing for the family. He actually deserves that vegetable smack from his mother. He might be Eun-ho’s (Hong Seung-hee) father now and he’s the most successful among the siblings but all of his ‘sacrifices’ couldn’t be equated to what Deok-chul and Hae-nam had to go through just to raise them. That specific scene was an introspective moment for me and I think, for every working son/daughter out there. And when Seong-san confessed to Deok-chul that he will be his “big pillar” no matter what. I lost it. I cried the hardest on that scene. It was another life lesson I picked up from Navillera.

Another touching parent-child moment here is when Shim Seong-suk (Kim Soo-jin) told her mother that she and Byun Yeong-il (Jung Hee-tae) will stop trying for a child. I don’t know but whenever Kim Soo-jin cries in a scene in whatever drama she’s in, that will always be one of the most memorable scenes for me. She might have lesser screen time compares to her sibs or other characters but her moments are always impactful. Just watch that scene from episode 12 where Seong-suk pleads to her father to let them take care of him and you’ll know what I’m talking about.

If I didn’t like Shim Seong-san at the start of the series, it was the opposite for Shim Seong-gwan (Jo Bok-rae). I like his character from the start. I knew that this hobo-looking filmmaker isn’t just some nonchalant family maknae as painted by his hyung Seong-san. He has his own pain and Deok-chul, as a father, let him be for a while. But when he stepped in, he made sure – just like how he takes care of every character in this series – that he wasn’t too imposing with his youngest. I was actually fine with Seong-gwan ending up being a filmmaker but I heaved a sigh of relief when he eventually went back to his chosen profession. His character arc is almost similar to Ho-beom’s and Chae-rok’s. He already knew what makes him happy and he just had to regain the strength and courage to do it again. And Deok-chul gave them exactly that.

Navillera magnificently soared with each of its characters’ beautifully written stories amplified by its visual storytelling. Its composition is carefully crafted and sometimes, tells a story on its own. They even prolifically use ballet as a matching analogy for Chae-rok and Deok-chul’s story. These two main characters of Navillera learned how to plié – bend their knees before straightening them back up – when life seems too tough to handle. Chae-rok and Deok-chul learned how to relevé and rise higher so they will be able to reach their dreams. And in the end, both of them sautéd and shined on their own respective life’s “stages.” Navillera has held onto its cinematic realism until the end but the series was still able to give a hopeful message for its viewers: we can all soar in our own way and our own time.

-I’ve saved a lot of lines from Navillera which we’ll *shameless plug* be posting on our K-drama QOTD on Twitter but these are some of my favorite quotes:

“It must’ve been so painful carrying the burden alone.” -Choi Hae-nam, Navillera

“When you want something with all your heart, you shine brighter than anyone.” – Shim Eun-ho, Navillera.

-I like Taemin and Sohyang’s OST for this series but Mr. Choi Baek-ho’s ‘End of Sea’ never fails to make me cry.