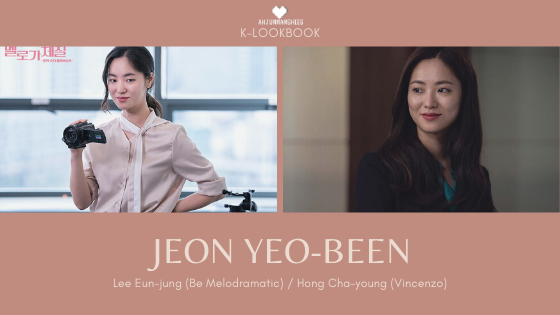 K-drama characters don’t dress up for the mere act of dressing up. The way they look and their choices of clothes reflect their personality. A way of expressing their individuality without being too loud about it; just letting their look speak for themselves.

Jeon Yeo-been, who flawlessly can jump from one role to another, can also carry the style of her characters like it’s her own. In the past few years, she graced our TV screen with impeccable performances and memorable characters.

Her two main roles to date Lee Eun-jung from the slice-of-life drama Be Melodramatic and Hong Cha-young in the dark comedy Vincenzo can probably be seen as opposites. One relishes silence and simple beer nights with her girlfriends while the other loves being surrounded by people and have wine nights with her partner. Those differences can also be seen in the way they dress. So, let’s have a look at these characters who shined in their own way.

Lee Eun-jung’s wardrobe staple is pretty obvious: button-down and blazers. Her style tends to lean on streetwears. She likes crisp button-down shirt and jeans combo. A pair that can’t go wrong and looks professional enough on its own. The right fit for her since Lee Eun-jung is always on the go to film her subject in their natural environment. But when she needs to look a bit more formal, Lee Eun-jung’s closet has the right blazer to wear on top of her usual casual-looking combos. Her blazer makes her instantly more polished; perfect when you need to take on a tough-headed director ala Sang Soo who badly needs a dressing down.

Her color palette of blue, white, and earth tones also reflect Eun-jung’s characteristics. The majority of her looks are in the shade of blue which can be interpreted in two ways: it may be the grief she’s been trying to hide or the calmness she always tries to exude. Her white and earth-toned shirts can go well with anything; just like the real Eun-jung who can adapt and survive in any situation she’s in.

AND Eun-jung may stick to her laidback fashion but she knows how to spice her look up on date night with girlfriends.

Lawyers in K-dramas don’t just wear boring suits like their male counterparts. No offense meant but women lawyers drop their explosive oral argument and own the courtroom while looking like the incarnation of Themis but in suits. And for a not-so-ordinary lawyer like Hong Cha-young, it isn’t at all surprising that her best armors when battling Babel are her tailored jackets and matching pants.

Hong Cha-young doesn’t need to shout it out to the world that she’s wearing this brand or that brand ala Booralro suits Vincenzo Cassano wear. Hong Cha-young can just wear anything and one will think it was sewn and designed for her. Hong Cha-young’s looks also prefer unique details than outlandish designs. Perfect for someone who wants to fit in but doesn’t want to be overshadowed. Although most of her suits are in black, Hong Cha-young knows when to play around and wear color. And when she says color she meant pastels and purple. Colors that the men species don’t have the courage to wear because they think it’s too ‘weak and feminine.’ That’s why I’m in love with Hong Cha-young’s pink suit because she proved that pink doesn’t make you weak. In fact, she can take on a giant while wearing one.

The Jipuragi’s main lawyer also loves her Joy Gryson and Marni bags as well as her Swarovski and Tiffany & Co. earrings. Her accessories adds elegance to her already sophisticated-looking ensemble of silk tops and pants or turtle neck and blazer looks.  But that doesn’t mean Hong Cha-young can’t appreciate simplicity. She also wears neutral-colored pieces when she wants to. Because strong women know what she wants and can decide decisively.

For sure, you will prefer the style of one over the other. But both Lee Eun-jung and Hong Cha-young’s style have their own charm. What I like the most about their choices is that it shows how both characters accept their individuality. Plus, we love them because Jeon Yeo-been breathed life to them as no other actresses could.