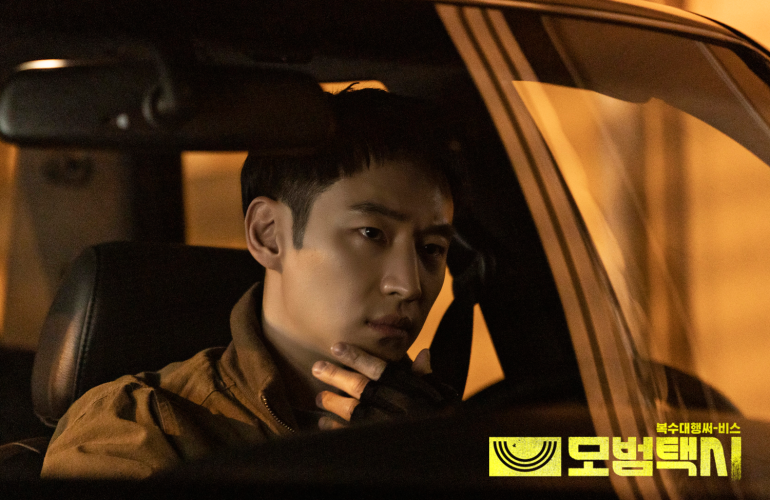 I’ve judged Taxi Driver wrong in its first week. I was so used to watching character-driven plots that I thought this series would go to that route. But nuh-uh, I’ve got it wrong. It was clear in the succeeding episodes that Taxi Driver would have an action-packed plot-driven narrative and it just needs me – the audience – to be in it for the ride.

Taxi Driver’s plot is simple. A group of civilians taking the law into their own hands to take revenge for their ‘clients’. The group’s cover-up? A taxi company. The series really focuses on the set-up of their revenge-for-sale group. It gives importance to each member of the Rainbow Taxi Company (RTC) and their role in their underground operation (which you can take quite literally because of the location of their headquarters). But since, as I’ve said, this is a plot-driven story, the main focus of the series has always been the actual plot itself. There are episodes, of course, that show the backstories of the main leads but the show doesn’t linger too much on them.

Even the story of the series’ main hero Kim Do-ki (Lee Je-hoon) isn’t told in detail. His past already starts on the day of his mother’s murder itself and how that day changed his way of thinking. The same goes with Ahn Go-eun (Pyo Ye-jin). The series intertwines their present case to tell Go-eun’s traumatic past. Speaking of these two, one of the main things I have enjoyed in this series is Do-ki and Go-eun’s friendship. I remember one scene on an earlier episode when Go-eun asked Do-ki how he handles a painful longing for someone. Do-ki’s answer is that he “talks about the good memories” of that person. It is in that scene that I realizes Do-ki, Go-eun, and the rest of the RTC’s members have similar traumatic pasts. And for Do-ki and Go-eun, they found comfort in knowing the other person understands their pain, which normal people can’t.

That is why Do-ki and Kang Ha-na has taken some time before they finally understand each other’s stances on certain things. Do-ki is fully aware of the consequences of their operation and that the law looks at them as criminals despite their intentions. Ha-na, on the other hand, knows that the law she abides and enforces has limitations that oftentimes result in injustice. Do-ki and Ha-na clash a few times in the series. They seem frustrated at how the other sees things but at the end of the series, they have found a compromise that benefits each other.

Another thing that I like about Taxi Driver is that it jumps from one case to another per week but at the same time builds up the main conflict of whether or not the Rainbow Taxi Company will be caught. Ha-na is the main driver for this underlying conflict. The built-up is actually a bit slow for my preference but the pacing picked up as soon as Ha-na has figured out what Do-ki and his friends are up to. It amped up the tension during Do-ki’s covert operations.

The cases that were tackled through its episodic format are also interesting since most of the subplots are based on real crime stories in South Korea. Sure, it has been done by other dramas, which are mostly crime procedural. With Taxi Driver though, they told those cases from the victims’ point of view. There is always a scene when Rainbow’s clients will tell their stories. The flashback to what they had to go through showed who they were before the crime happened, how inhumane they were treated, and how immense they have suffered. It doesn’t really attempt to justify the group’s operation but it gives its audience a different perspective on why they would seek revenge for the victims. The series has also emphasized that no matter what path these victims choose – be it revenge or fight their perpetrators in court – things will never be the same for them. One of the best scenes for me in Taxi Driver is Do-ki and Ha-na’s argument on how they both have the same goal but they have very different ways of achieving it. In that scene, Do-ki told Ha-na that “what done is done” and that victims “can no longer go back to the way things were.” It perfectly sums up what the victims feel and offered a new kind of perspective for Ha-na.

Aside from its smoothly-driven plot, what makes Taxi Driver’s story execution effective is the performances of the actors. Both the main leads and the villains breathed life to their respective characters. Lee Je-hoon leads the cast with his different disguised each week – he’s an eyeglasses-wearing high school teacher in one episode then becomes a sunglasses-donning fur-coat-wearing criminal in the next. The antagonists in each of their cases match Lee Je-hoon’s performance too. They were so effective in making my blood boil in anger with their cruel acts. Another stand-out in this series is Cha Ji-yeon’s portrayal of Baek Sung-mi. Her character’s presence hovers over our main leads throughout the series. Her character is mysterious from the start and piqued my curiosity on what exactly is her role in this whole revenge-for-sale operation. And Cha Ji-yeon as Baek Sung-mi delivered when it was time for her to reveal her true colors. The fall-out between Sung-mi’s group and Rainbow Taxi Company isn’t surprising but the tension during the face-off between Sung-mi and Do-ki is fitting for the finale arc.

What I also like to emphasize is Taxi Driver’s over-the-top characterization of these villains. They based it on real crimes but the series obviously exaggerated the characters with dramatic nuances. What I appreciate though despite the added embellishment is that the series didn’t hold back in showing the extent of their cruelness and always stick to telling the story from the victim’s point of view.

All this being said, Taxi Driver’s plot execution is one of the best this year. It’s a series that K-drama viewers, who prefer plot-driven narratives and action-packed episodes, will enjoy. It might not fit my personal preferences when it comes to K-dramas but I definitely enjoyed the ride.