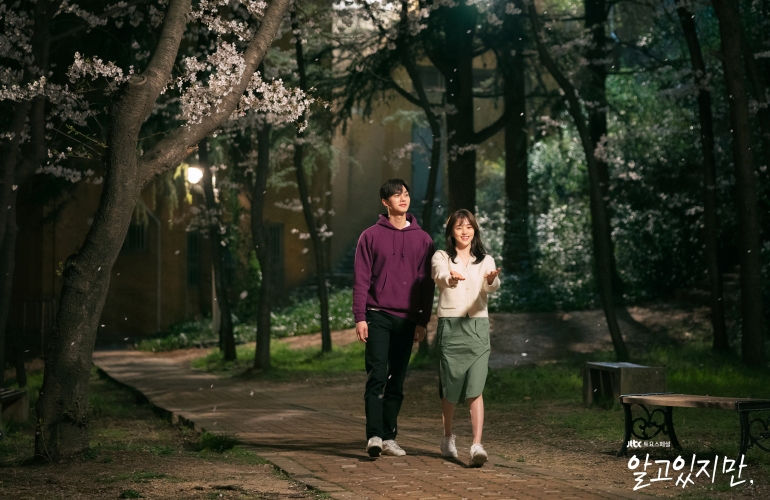 Hmmm. I did not know anything about the webtoon version of this drama, so I was unsure if they followed everything from there or just loosely based it on the story. All I can honestly say is that Han So-hee and Song Kang are right off the bat a pair to watch out for. Their visuals and the chemistry are both on point. If this drama delivers a compelling story, then I’m all for it! But for now, let’s tackle the main issues that the first episode conveyed.

We grew up in a world where we are made to believe that love brings butterflies to our stomachs. Sometimes fleeting, often deceiving – love is a deep emotion that either makes or breaks a person. We meet our main heroine, third-year college student Yu Na-bi (Han So-hee) in such a fragile situation in this pilot episode. She’s majoring in sculpture and has a great dream of being in a student exchange program. However, she’s in an uncomfortable, toxic relationship with her professor. Her much older boyfriend doesn’t respect her boundaries and is notorious for gaslighting and emotional abuse! The first few scenes were honestly uncomfortable to watch. Poor girl had to go through this awful situation.

Her boyfriend manipulates her every move. My gosh, the immaturity went rock bottom when he bitched about Na-bi’s colorful polished nails! He wanted her to ask for his approval about the damn nails when he even dared to create a sculpture of Na-bi’s intimate positions during their private time. And if that doesn’t make him disgusting enough, he even had the nerve to cheat on Na-bi with another student! Good thing, our girl knows her worth and dumped the jerk not long after.

And when she’s in her vulnerable state, cue in the fuck boy – the male lead, Park Jae-eon (Song Kang), who is a college freshie but the same age as Na-bi. He transferred from another school or another course, I wasn’t sure about that, but yeah, he’s technically a hoobae, but they’re the same age.

So… why the subhead? Well, it’s my best description of Song Kang’s character. Jae-eon is such a flirt, and he knows how to play the game! If ever I went to the same class as this guy and he hits on me just like he does with Na-bi, I’m pretty sure the red flags will be ignored ultimately, and just get on with him! Ok, but seriously, Jae-eon is uncomfortably touchy as a stranger, and he is a social butterfly. Maybe this is how they wanted to make nuances of him and Na-bi’s personalities. Na-bi’s name means “butterfly” in Korean, while Jae-eon has a pet butterfly and likes butterflies in general because “they’re pretty”(ok fine). I feel like the butterfly representation will be a main driver in the story in terms of the leads’ contrasting personalities and fickle behavior.

There’s not much to say about the story, plot-wise, because we’ve all just met the main characters and their school clique. I like their meet-cute, though. On the night Na-bi ended her toxic relationship, Jae-eon entered her life. I wasn’t sure if the “canceling on his date” was a pick-up line or a true event, but either way, it just strengthens the point of Jae-eon being a walking red flag and must be avoided at all costs. He’s not a good rebound boy and has the potential to hurt Na-bi bigtime. But we all know where the story goes from here based on the drama’s synopsis.

I think they’re going for the fubu or friends-with-benefits kind of relationship here, and I look forward to the dynamics of two souls – one cynical, the other typical – in their journey to love. I can’t brand Na-bi as innocent because she’s not. She’s just a wounded girl with valid trust issues and broken self-esteem. I hope she doesn’t let this heartbreak turn her into an insecure monster that eats her inner self. Please let this character be a strong-willed woman who grows through time.

For Jae-eon’s part, I’m curious how he turned into this flirtatious guy who doesn’t take relationships seriously. I wonder if he already fell in love before. As I said, I wasn’t familiar with the drama’s original basis and I don’t plan to read it anyway so as not to taint my views on the story. I would like to get to know Jae-eon as a real person, someone who’s not just obsessed with butterflies.

Bad for the heart

Lastly, I like the directing – the close-up shots, the cinematography, and the setting! They emphasize the drama’s tone and pacing. The only thing that worries me, though, is Na-bi’s tendency to overthink about everything! From start to end, we had heard her thoughts for every situation she’s in. Although this gave us a good gauge of her relationship with her ex-boyfriend, the way she frets and agonizes over Jae-eon’s actions bother me. Girl, don’t read everything in detail. It will just cause you anxiety!

Anyway, this drama has great potential, and you know me, I like my slow burn romances! Can we get lots of studio dates, please? Or any artsy cutesy interactions between these two art students! I know this is Rated-19 in Korea, and I’m not sure how much of the content has been censored on Netflix, but I like it and I look forward to watching Na-bi and Jae-eon’s character growths.

[Credits go to JTBC for the still photos]