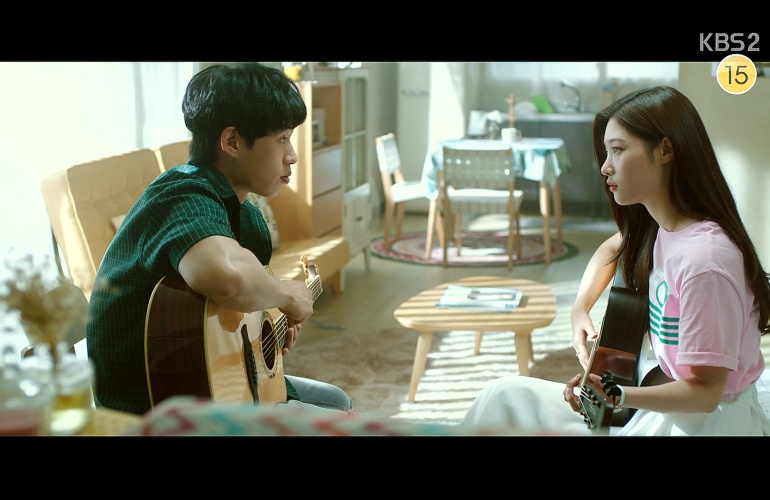 “Every man has a woman they can never forget.”

To.Jenny is a two-part music themed drama from KBS2 which stars actor Kim Sung-cheol and DIA/IOI’s Jung Chae-yeon. It tells the endearing love story of Park Jung-min, a part time worker who dreams of being a famous musician but suffers from stage fright; and Kwon Na-ra, a struggling idol who dreams of being on stage again.

For this drama rewind, I decided to list down all the songs that accompanied Jung-min and Na-ra as they learn to outbrave their fears and fight for their dreams.

The adorkable Jung-min introduced himself and his hilarious friends through this song. Basically, it explains how he and his pals were the only persons eating samgyupsal without a significant other, but that it’s okay because lovers will break up in the end. The song was originally performed by A.COMA.

Did you ever do something so embarrassing in front of your high school crush that it haunts you forever? If yes, then you’ll surely relate to Jung-min. The second song, which is originally by duo Melomance, is the culprit behind our hero’s “Off-key Park” nickname.

During a school festival, he decided to perform to be noticed by his first love, Na-ra a.k.a. the school goddess, but ended up being humiliated when his voice cracked. Since then, he developed a stage fright.

I’m warning you, don’t listen to this song if you are highly susceptible to LSS or the dreadful last song syndrome. You’ve been warned, this song is a bop!

With the help of his charming younger sister, Ok-hee and her online stalking skills, Jung-min  found out that Na-ra likes tiramisu cake. While working at the convenience store the next day, Jung-min awkwardly gave his lady love a tiramisu cake guising it as a one-plus-one promo with a pantyhose. Yep, a pantyhose. Na-ra then posted a picture of the dessert on her insta which gave birth to this addicting song.

This earworm was originally sung by indie band We Are The Night.

One of the things I appreciate most in this drama is how the PD was not afraid of using both indie songs and tracks from famous artists. Train’s Soul Sister is playing in the background when Jung-min found out that Na-ra needs to take guitar lessons. He rushed home to get his guitar and carried it all day at the shop like a pabo kekeke.

Another chart topper included in this drama is Tay Tay’s 2009 track You Belong With Me. The song was used when Jung-min and Na-ra agreed, cutely if I may say, to settle her guitar tutorial fees with snacks from the convenience store. You Belong With Me‘s upbeat sound perfectly encapsulates Jung-min’s growing feelings for Na-ra as they became closer.

It’s not hard to picture Jung-min in Taylor’s white shirt holding an “I love you” sign.

Grab Me is a personal favorite from to.Jenny’s OST. With fried chicken as bribe, Jung-min asked his best friend, Dae-sung to help him finish the new song he composed. I appreciate how PDnim showed the process in creating this track, with Jung-min having the lyrics and tempo and Dae-sung providing the melody. The latter even suggested to have the song played in stacatto. I also like how this became a duet with the two boys.

PS: Me when I hear there’s free food.

The K-Drama genies were kind enough to Jung-min and gave him a chance to redeem himself in front of his first love. The two visited their old high school and Na-ra asked him to play this song. Fortunately, Off-key Park is no where in sight. Jung-min gave an emotional take on this piece, remembering the moment when he first sung it to Na-ra.

One thing I love about watching dramas is how they introduce you to wonderful tracks. This is a great example of that. Damien Rice’s Grey Room is a must-listen for me. It’s the kind of song you’ll listen to when you want to silently cry your heart out. 😥 This ballad accompanied Jung-min as he walked alone, désolé after finding out Na-ra has a boyfriend.

Though this tune was only used briefly when Jung-min was composing a song for Na-ra, it certainly caught my attention due to my obsession with 500 Days of Summer.

For some reason, this drama actually reminded me a little of my fave Zooey Deschanel movie. Especially the montage when Na-ra was introduced.

I guess we have a fellow Swiftie here since another Taylor Swift anthem is used in this series. Na-ra and Jung-min went on a drinking session after the former was dumped by her boyfriend of five years. Begin Again was used to set the mood when Na-ra promised that she’ll try her earnest to debut again and when Jung-min agreed to join an open mic after Na-ra pinky promised that she’ll come to watch him.

Your Song is Jung-min’s personal composition and gift to Na-ra. Of all the songs used in this series, this one for me is the best. The soft melody beautifully portrays Jung-min’s genuine feelings for Na-ra and the lyrics act as his promise that he’ll always be her “umbrella when it rains or her lighthouse when it’s dark.”

Na-ra uploaded it on her SNS and got good response. This led to her company CEO promising to release her with a single using Jung-min’s track.

Tipsy’s Favorite Line: Baby now I’m never ever leaving by your side, I’ll be your song.

To celebrate, Na-ra and Jung-min went on a halibut festival the next day. Carly Rae Jepsen and Owl City’s Good Time was used during their trip. What I like about this part of the series is how they made it appear that Jung-min was the one taking the video. I believe this has a special appeal to the audience since it felt more personal from Jung-min’s perspective.

Later, Na-ra revealed that the festival is where her group, Cocoa, performed the first time. This is also the part where this very awkward kiss happened kekeke.

This ballad accompanies a crying Na-ra after finding out that her CEO gave Jung-min’s song to a popular artist in their company. Na-ra fearlessly cut ties with her label and reject another bleary promise from her CEO. Stars’ emotional melody depicts the pain of giving up on her dream.

Another track of We Are The Night gave color to this series. While Na-ra was grieving the death of her dream, Our Younger Days played in the background. The first lines of the song felt like they were Jung-min’s words giving comfort to Na-ra. It goes, “Don’t cry, my dear. Please don’t stagger even if the roads are shaking.”

Jung-min finally mustered the courage to sing in front of an audience during the open mic. Unfortunately, Na-ra broke the most sacred pinky promise and didn’t show up. And just when she was about to head to Jung-min’s performance after watching his insta videos for her, Jung-min appeared at the computer shop where she works. Armed with his guitar, Jung-min sang his heart out and confessed his feelings to Na-ra.