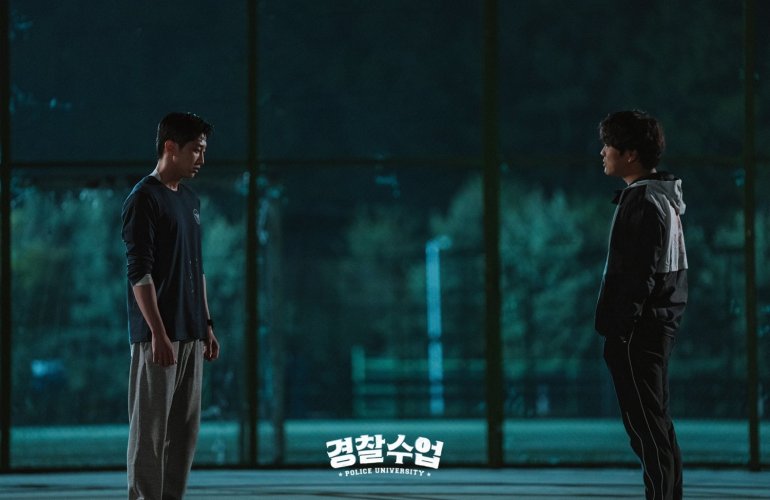 The series portrays life at the Korean National Police University (KNPU). The story revolves around Yu Dong-man, a violent crime police officer who got relegated to being a professor/trainer at the university after breaking investigation procedural rules while trying to catch a criminal; Kang Sun-ho, a hacker who finally found his dream; Oh Kang-hee, a passionate judo player who is finally a step closer to her dream of becoming a police officer. All three learn more about life and about themselves as they navigate each day inside the distinguished police university.

Youth drama has always been a comfort genre for me and is not surprising that I think Police University is right up my alley. It has the elements that excite me the most in a series: underdog dreamers? the main leads are; potentially squad goal friendships? Yes, there is, portrayed by actors who played my fave side characters in past series; and interesting plot? Definitely.

Just like any other drama premiere, the first two episodes of Police University show the set-up of the story, introduces the characters and places them where we can know what kind of dynamic we can expect from them. Now, let’s meet the characters that left a good first impression on me. As far as the first impression goes, our protagonist Kang Sun-ho failed to make a good impression upon meeting Yu Dong-man. He just didn’t fail, he really butchered their first meeting. He and his hacking skills got in the way of Dong-man’s current case. Dong-man let it go for the sake of his sick father but once their crosses path again at the university, Dong-man made sure to make his life miserable.

And it seems Sun-ho isn’t that lucky with first meetings. Sun-ho and Oh Kang-hee’s first encounter was due to an unintentional mistake. But it wasn’t that bad as far as romantic meet-cute is concerned. It is adorable, funny, and unexpected in so many ways. Their first meeting really checked all the boxes in what a meet-cute should be. And my interest in these two characters didn’t wane after that. It grows and grows in each scene they have together.

I’m also excited to see more of Sun-ho and the other KNPU freshmen. Park Min-kyu (Choo Yeong-woo) is looking like his potential rival in both the training and to Kang-hee. I can’t read him for now since he got little screen time in the premiere week. I hope though he wouldn’t really be a full-blown antagonist. Well, KBS youth dramas really don’t do that but let’s see. If Sun-ho found a potential rival, he also found possible lifelong friends. No Bum-tae (Lee Dal) and Cho Jun-wook (Yoo Young-jae) are Sun-ho’s fellow misfits in the university. I’m looking forward to seeing more of this trio’s misadventures especially because I actually enjoyed watching Lee Dal and Young-jae in their previous dramas. I also got excited seeing Choi Woo-sung here playing Sun-ho’s brother Yoon Seung-bum. But I guess, I won’t be seeing him again until probably the last arc of the series.

The people around Dong-man are as interesting as those around Sun-ho. The KNPU Faculty has diverse characters that I think will bring more color to the series. Judo teacher Choi Hee-soo (Hong Soo-hyun) seems to be interested to know more about Dong-man. It is understandable as Dong-man is an eccentric police officer who’s not afraid of breaking rules. He’s the opposite of law teacher Kwon Hyeok-pil (Lee Jong-hyuk) who is as upright as one can be. Aside from the freshmen’s lives, Dong-man’s life at the university is also interesting to explore especially because it wasn’t really his choice to be there. I wonder if he’ll pick a lesson or two while teaching the aspiring police officers what it really meant to be one.

I’m also curious how the bad blood between Sun-ho and Dong-man will get resolve. I’m waiting for them to continue their online bond in real life. It excites me to think that the peculiar cop and the hacker police-in-trainee will work together and learn from each other in the process. Because the first two episodes seem to promise just that.