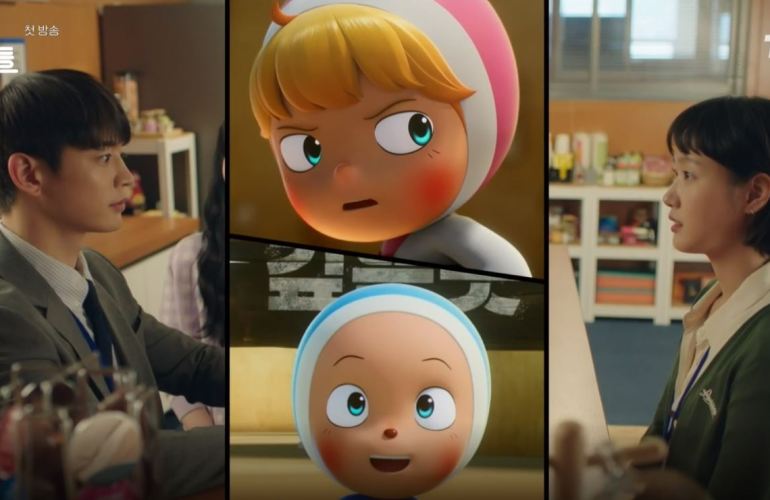 Based on the hit webtoon by Song Jae-jung, the story of Yumi’s Cells revolves around Kim Yu-mi, an ordinary office worker, and her ‘cells’ that represent each of her emotions. The series will show us her daily life and inner struggles as she tries to find happiness and love.

We have a new favorite drama! My cells are happy meeting Yumi’s Cells I just can’t get enough of it! I was only going to watch it for the sake of supporting Minho’s special appearance, but I ended up loving the drama as a whole! And now I’m trapped in the dark hole of the webtoon version. Aside from the stellar performance of the one and only Kim Go-eun, the animated cells are the bomb of this show! They bring so much joy to the audience and every single interaction they have is a delight to watch! We are having so much fun with the drama that we are now incorporating the “cells” IRL!

For starters, the drama is about Kim Yumi (Kim Go-eun), an average office worker who suffered from a heartbreak three years ago. She became aloof and routinary for the past years, but not until developing a happy crush on the guy from the Sales team – Chae Ugi (Minho). While everyone sees Yumi as the typical sunbae at work, we also get a glimpse of what’s inside her mind and body. Her cells have their respective personalities – and they interact with each other! They all have jobs to do in Yumi’s daily life, and you may imagine it just as how our normal cells would work – but a personified drama version.

Usually, the first two episodes of a K-drama could be either too slow or too fast as the series tries to fit all plot and character introductions in their premiere week. It’s crucial but at the same time, everything that happens in these first two episodes is always forgivable since most K-dramas become better after they’ve laid out everything they need. That’s why I was ready to “forgive” Yumi’s Cells if ever the first two episodes wouldn’t suit my taste. I even prepared myself for “too much” animation that the series mentioned during their promotion. But all of that pre-drama preparation is so unnecessary as Yumi’s Cells’ exposition was exquisitely made. It’s one of the few K-drama gems that have perfected its premiere week episodes.

The series seamlessly intertwined Yumi’s real-life scenes and the scenes inside her head. It was a very unique and creative way to show a character’s introspection. The animated scenes were very entertaining to watch. Surprisingly, this has been my favorite part of this series aside from Kim Go-eun herself. I’m now attached to Yumi’s cells as much as I’m in love with Yumi’s character. They even cleverly used an introductory subplot – Chae U-gi – so that the audience would be able to familiarize themselves with the series’ back-and-forth narration style. The transition from this introductory subplot to the actual main plot was also seamless.

And because I’ve watched how Yumi’s inner thoughts work – quite literally – I instantly liked her character. Kim Go-eun is also a key factor in Yumi’s likability. She smoothly transformed into Kim Yumi, the “ordinary” office worker whose heart had been broken in the past but still functions like a normal person, many thanks to her hardworking cells. One would find a piece of themselves to Yumi – be it her heartbreaks, her work struggles, or life frustrations. Now, I can’t wait to watch the rest of the series!

💖 Can Minho become a mainstay for this series?

💖 Or if not, can he and Kim Go-eun work again on a project?

💖 Here’s a list of all Yumi’s Cells that appeared in the webtoon version.

💖 We’re curious about our reader’s prime cell. Share it to us in the comment section or on our socmed platforms!