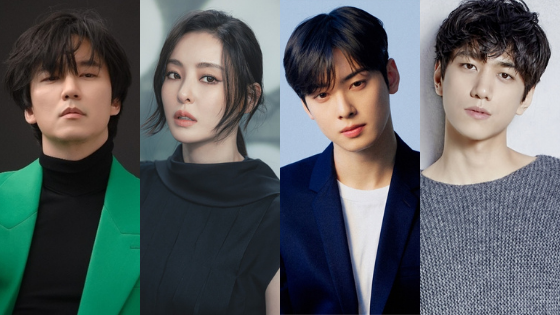 Loosely based on the webtoon of the same name, Island revolves around the adventure of a monster hunter who needs a woman to end his cursed immortal life, a chaebol daughter who is being targeted by goblins, and a priest who is consumed by guilt.

Kim Nam-gil takes on the role of Pan, an immortal monster hunter who has been protecting the world from demons. His main ability is to collect emotional wounds unseen by others. He possesses human warmth and coldness of being a supernatural creature.

Lee Da-hee will be playing the character of Won Mi-ho, the arrogant and selfish daughter of Daehan Group’s owner. After her father vanished, she now works as a high school Ethics teacher in Jeju Island.

Cha Eun-woo is set to play Kang Chan-hyuk, who also goes by the name Yo-han/John. He is a hip exorcist priest who grew up in the United States, and watches local shows to practice his mother tongue. Despite his bright personality, Yo-han harbors deep guilt for not being able to protect someone in the past.

Sung Joon has also been confirmed to play a supporting character in the drama.

The drama will be directed by Bae Jong and written by Jang Yoon-mi. It will premiere in the first half of 2022.