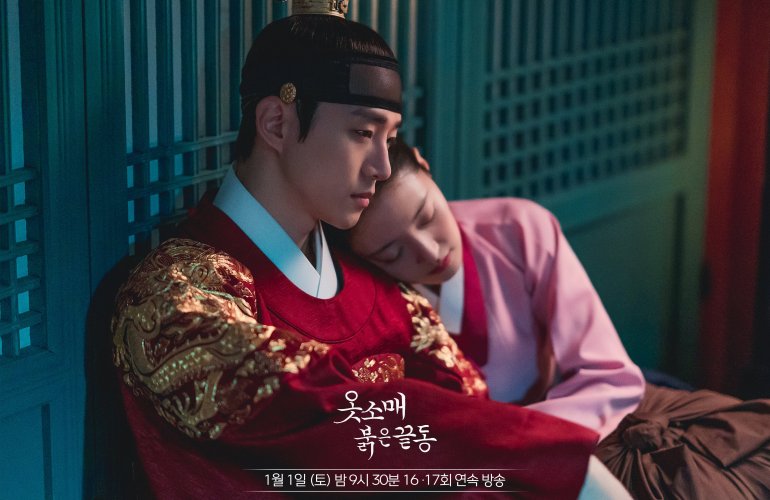 Self-love is the highest form of love. It’s when you know your worth as a person, and you value yourself more than anything. You understand that life will never always give you what you want, but if you are aware of yourself, every decision you make, and every path you take, yourself will always be your number one priority. This is my major takeaway from 2021’s yearend sleeper hit drama, The Red Sleeve. It’s a phenomenal sageuk that delves into the romance of King Jeongjo The Great and his concubine Royal Noble Consort Sung Ui-bin. Yes, like fanfic coming to life – a retelling of the tragic end to a love story of real historical people.

The Red Sleeve was a welcome surprise to everyone, particularly to MBC (its home network), because it’s been a lackluster year ratings-wise. The good praises were all well-deserved though as the writing, performances, storytelling was brilliant! Lee Jun-ho was meant to be king, and Lee Se-young was the perfect Deok-im. I welcomed their unexpected chemistry with open arms and starry eyes! The drama was a good way to end the year!

The Palace is just a dazzling prison

As with almost all period dramas, life in the palace is always described as miserable, lonesome, and full of vengeance. The characters trust no one. Their loved ones get killed all the time, and the political power play is always at its peak. The Red Sleeve is not different in terms of how savage life in the palace could get, but this time we watched it from the point of view of court ladies. These maids are the eyes and ears of the palace. Aside from the eunuchs, they are the ones who are with the royals every single day. They take care of the royal family members from the most mundane tasks up to the most intimate moments. It’s fascinating to see them up close through this story, as oftentimes they are sidelined in various dramas even when they play a big role in the life of the monarch.

Before becoming a royal concubine, the heroine goes by the name Sung Deok-im (Lee Se-young), a young court maid full of enthusiasm. She is famous among court ladies for her beautiful handwriting, and her occasional part-time job as a book reader. As this was set in the Joseon era where not all can read and write (especially women), Deok-im is a resourceful girl who knows how to take advantage of her skills.

And then she met Crown Prince Yi San (Lee Jun-ho). It was fun watching San disguise as a royal tutor while he’s with Deok-im! Their banters were light and full of quirks. This didn’t last long though as Deok-im eventually figured out that her master and the tutor are one person.

The push-and-pull between the love birds began when San’s position as the Crown Prince is being threatened by multiple factors. He’s the son of Crown Prince Sado, who was killed by his own father, The King. Aside from political enemies, tension within the extended royal family, San is unknowingly facing a bigger threat to his future reign: the court ladies, who formed a secret organization with one covert mission – dethroning him as the Crown Prince.

But San’s determination and intellect proved that he is destined to be king. Through the help of his trusted allies and with Deok-im by his side, San emerged to the throne. The struggles of San were typical of a historical drama, but nevertheless, it was satisfying. Jun-ho captured the sincere emotions demanded by the character. San is a lost orphaned boy who walks on eggshells all his life because of the death of his father. He lived through the complicated dynamics of his family, led by his fragile grandfather King Yeongjo (Lee Deok-hwa). One wrong move, he’s out. I can’t imagine how much pressure San would have felt living in the palace.

The story mainly revolved around Deok-im’s constant inner struggle whether to stay by San’s side as his concubine or remain a court maid, where her heart truly lies. Deok-im is already a strong and delicate character on paper, but Lee Se-young portrayed her in her own light. From the very start, Deok-im is firm about wanting to have the freedom to choose what she wants, with the limited options she had. There are lots of consequences for being a court maid, and Deok-im wants to maximize her chances of choosing her own fate as much as possible. She wants to grow old with her friends and loved ones. She wants to save up for her brother and live simply when she’s older. It’s the simplest things, but for Deok-im, it’s her life that she values most.

When San became King, the situation got worse. If Deok-im chooses to be with San, she will lose the life she enjoyed and be locked up in an imaginary prison cell where she has no freedom with everything, even the food she eats and the clothes she wears. Her life will be determined by others, and she will be the King’s possession. Her heart belongs to San, no doubt about that. But he will never be her husband, and she will never have him wholeheartedly. It’s a complicated set-up, and I completely understand Deok-im for her countless hesitations.

The drama stayed true to the major historical events – which was why I already anticipated Deok-im’s death. I didn’t expect the drama to follow through with San’s demise, though. It’s painful to watch San live through the memories of his one true love. The drama is more of an “actions speak louder than words” type of romance. No straightforward love confessions; just deep dialogues about each other’s affection for the other person. And I appreciate it to be honest. We are saturated with over-the-top giddy romance stories nowadays (not complaining, btw), so the simplicity of The Red Sleeve’s “SanDeok” couple was its main strength.

🪁 Head Court Lady Cho (Park Ji-young) changed the way I looked at the court ladies in a period drama.

🪁 Kang Hoon as Hong Deok-ro impressed me so much in this drama!!!

🪁 Queen Jeong-soon (Jang Hee-jin) is such a cunning character I love her. She plays her cards well and keeps her enemies close. She’s the one who described the palace as a prison, and I can’t blame her! She’s been staying in her quarters since she’s a minor, forced to become the Royal Consort and grandmother of royals who’s almost her age. Jang Hee-jin did the character justice.

🪁 This friendship is one for the books! I was crying when it was only Kyung-hee (Ha Yul-ri) who was left behind ☹

🪁 Leaving this series review with my favorite soundtrack from the drama: