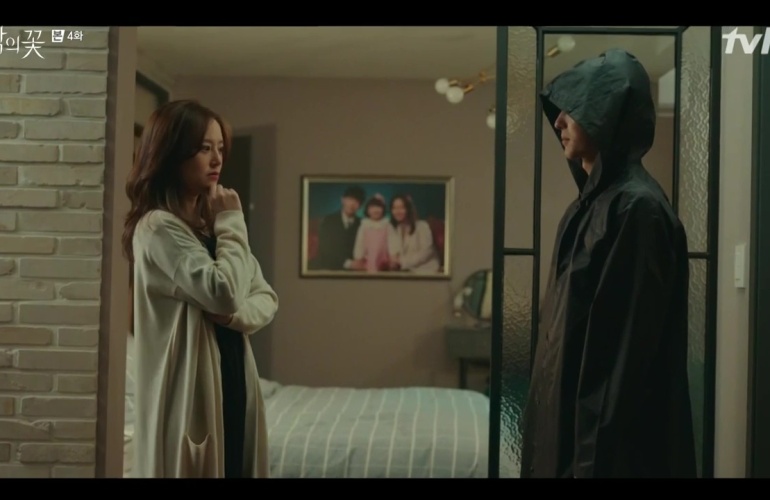 Because I was so intrigued by the first two episodes of this suspense thriller, I have decided to go back into writing weekly episode reactions for the blog. I feel like one series review would not be enough to articulate all my thoughts while watching this drama. I have been a Lee Joon-gi fan for the longest time, and Flower of Evil, I must say, is in the running to be one of his best works yet. Not to mention, this is my first ever Moon Chae-won drama, and I like her a lot here, too! Okay, so I think I’ve made my point so let’s get right into the deets!

Before opening what happened in Episode 3-4, may I just comment that both of these episodes made shocking revelations! I can’t believe we’re moving this fast in the story’s pacing but I like it! The cat and mouse chase between Baek Hee-sung (Lee Joon-gi) and his wife Cha Ji-won (Moon Chae-won) is taking us off the edge of our seats every time!

Reporter Kim Moo-jin (Seo Hyun-woo) remains a captive in the basement of Hee-sung’s metal shop. And after some scary push and pull between the two, they formed a very unlikely alliance in uncovering the murder of Nam Soon-kil (Lee Kyu-bok), who is Do Hyun-su’s old acquaintance when he used to work at a Chinese restaurant years before he became Baek Hee-sung. Nam Soon-kil has been receiving threats from a certain caller introducing himself as “Do Hyun-su.” To make things worse, the manner Nam Soon-kil was murdered was similar to the serial killing victims of Do Min-seok, Hyun-su’s real father.

Cha Ji-won’s team is the one assigned to probe the case, and in search of the prime suspect, they located his sister, Do Hae-su (Jang Hee-jin). The siblings have never been in touch since the village foreman murder case (which Do Hyun-su is also the suspect). Not knowing that Hyun-su is her real husband, Ji-won looks deeper into his childhood. I felt really sad with the exorcism scenes and the childhood scenes of Hyun-su. It’s just unfair for the children to be blamed for the sins of their father, especially when there is no clear evidence about their involvement. Of course, it’s a different story once we all prove that Hyun-su indeed killed the village foreman, but we are pretty sure he did not kill Nam Soon-kil this time.

And by the end of Episode 4, the real killer was revealed – Park Kyung-choon (Yoon Byung-hee). He is a taxi driver who purposely approached Nam Soon-kil to know the whereabouts of Hyun-su. He is connected to the last victim of the serial murder case – whose body was never found!

As I’ve said earlier, these two episodes were super jam-packed! Episode 3’s cliffhanger revealed that the real Baek Hee-sung (Kim Ji-hoon) is alive all along – but in a comatose state – in the house of Hee-sung’s fake parents. I always wondered how he ended up with such cruel faux parents, but we now have a glimpse of the start of their relationship. I honestly can’t wait for Kim Ji-hoon’s character to wake up (don’t kid yourself, we all know he will wake up soon) to make matters more complicated!

🥀 Lee Joon-gi as a dad is now my favorite Lee Joon-gi! Baek Eun-ha (Jung Seo-yeon) is a little precious bean! I can’t imagine Hee-sung/Hyun-su killing a person when he’s this sweet with his daughter! 😦

🥀 Do we have a ship name for Hee-sung and Ji-won yet? They’re so adorable! They have been together for 14 years and not a single moment did Hee-sung hurt Ji-won, as shown by how they are still affectionate with each other! I know Hee-sung’s love for Ji-won may be superficial for him, but I know deep in his heart, he loves Ji-won for real. He just don’t know it yet! Just like what Ji-won told him when they were younger, “Has it ever occurred to you that you’re the only one who doesn’t know you like me?”