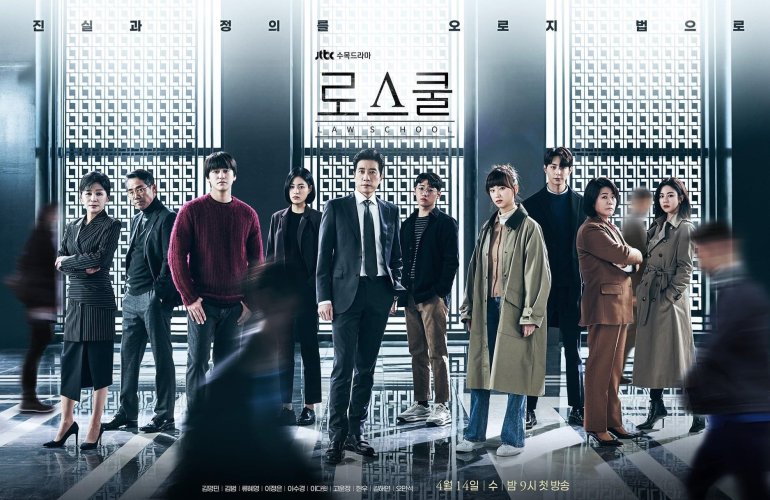 Plot Synopsis: Students and professors of Hankuk University Law School become prime suspects in the murder of a former prosecutor-turned-professor.

Some say this feels like a spin-off of the “How To Get Away With Murder” hit series. While I agree to some sort, I feel like this version is more subtle. There are some similar shots (even dialogues), and the non-linear storytelling also feels familiar for HTGAWM fans. But personally, this drama feels more like a mash-up of Forest of Secrets and SKY Castle in terms of scoring and character presentation. Nevertheless, it’s interesting, and I’m already hooked. We are all fans of whodunit dramas in this webspace, so it’ll be fun solving the hints together. The only annoying thing is the way the timelines change. Navigating from past to present is so puzzling.

Kim Bum leads the ensemble of first-year law students as Han Joon-hwi. He is always the top student and knows his readings very well. He gives off a cold vibe towards his slain uncle, Prof. Seo Byung-ju (Ahn Nae-sang).

Next up is Ryu Hye-young as the energetic Kang Sol. Her classmates and professors call her Kang Sol A because there’s another Kang Sol in the class, who goes by the nickname Kang Sol B (Lee Soo-kyung). Sol A got into law school through special admission, and so far, she’s the most relatable character here. She struggles in memorizing her cases and works part-time to support herself.

Speaking of Kang Sol, her namesake Sol B is the total opposite. She is your typical grade-conscious rich girl who’s out to eat anyone who gets in her way. I love her, though. She can pass as an Erudite or a Dauntless.

The professors are a more intriguing bunch. Criminal Law Prof. Yang Jong-hoon (Lee Myung-min) is a former prosecutor who left the league after his only cold case (an unresolved investigation) involved his then-superior Chief Prosecutor Seo Byung-ju. During the first few scenes of the pilot episode, we saw Prof. Yang wearing an electronic tag on his ankle, which tells me he is a former detainee. I’m not sure about this, though, but in most countries, that’s what e-tags are for. Prof. Yang’s moniker in HULS is “Yangcrates” because of his Socratic method of teaching. Well, we can just call him the Korean Annalise Keating. I like Prof. Yang, and like in most whodunit dramas, the first suspect is usually not the killer. So when he was arrested (during class in flagrante delicto!), I wasn’t bothered. But the arrest confirmed to us the other suspects (aside from Prof. Yang) in Prof. Seo’s murder.

On the other hand, Prof. Kim Eun-suk (Lee Jung-eun) is a judge-turned-professor who now teaches Civil Law. Her way of conducting lectures is opposite that of Prof. Yang, though they’re good friends outside of class. She just recently gave birth in the most dramatic law school fashion. Uncannily, her last promulgation as a judge also involved Prof. Seo! It’s about a child rape case, whose perpetrator named Lee Man-ho recently completed his 11-year sentence. Ugh, I hate him.

As I said, this was somehow related to Prof. Seo because Prof. Yang’s cold case was a hit-and-run incident that killed the only witness to the Lee Man-ho child rape case. That hit-and-run driver who never got charged? Spoiler alert: It’s Prof. Seo. I know everything feels overwhelming and twisted since we’re just in the first two episodes, but this is what makes whodunit dramas engrossing right? The more convoluted, the better.

The pilot week was generous enough to lead us into the circumstances surrounding the death of Prof. Yang. All we know for now is that 1) he died due to meth overdose; 2) there were footprints found in the crime scene which belongs to Prof. Yang, Joon-hwi, Sol B, Seo Ji-ho (David Lee), and Jeon Ye-seul (Go Youn-jung); and lastly, Prof. Seo is a shady person himself, and all the suspects clearly have a motive to kill him (though we have yet to delve into the backstories of the students).

⚖️ Kim Bum is already nailing this character. Now we all know where Lee Rang reincarnated! Will he finally have a love line in this dramaverse?

⚖️ Ye-seul doing makeup in class is my new spirit animal! A bit worried for her, though, because of the bruises on her wrists. Is she a victim of dating violence?

⚖️ We are all Sol A during college.

⚖️ I have so many questions for Prof. Yang, but this gives me peace of mind for now. My gut tells me it’s Joon-hwi who killed his own uncle, and I’m resisting the urge to overthink hints so as not to get played by a show yet again. I see you, Light in Your Eyes PDnim, I see you.