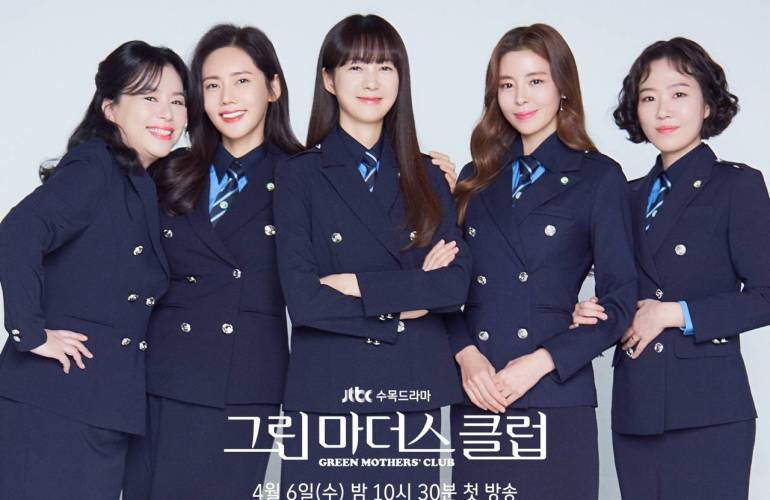 Five moms in a competitive grade school community keep their enemies close, and one another closer, as envy and secrets tangle and unravel their lives. (sourced from Netflix)

We have another “rich moms with pressured children” kind of drama on the block! We are dealing with elementary students this time, and the story is full of hints of mystery and juicy gossip. The drama revolves around the lives of five mothers – whose children are all in one class. They have very diverse backgrounds and complex relationships. I am curious how friendship will develop among them (if indeed there is).

Lee Eun-pyo (Lee Yo-won) is the main character it seems like. She’s the “good” one, I think? Her background is a little bit hazy for now, but all I know is that she spent most of her life in the academe. She majored in Aesthetics, studied in France for her master’s, dropped out of French uni, and completed her doctorate degree back in Korea. Her personality seems dark and insecure with so many things. Her opinions on raising children also fall on the unpopular side. Honestly, I’m not attached to Eun-pyo as the heroine yet. I need to warm up to her more – maybe it’s because she rarely spoke in the first two episodes. It’s hard to comprehend what she feels, what she stands for, what she’s like when all we see from her are her rolling eyes, occasional smirks, and bitch face.

Eun-pyo’s ways of raising her children are also sending me warning signals. She’s not aware of her children’s behavior at school and insists on not enrolling them in extracurricular classes because she doesn’t like forcing a parent’s dreams on her children. She’s admirable in a way because she knows her ground but when your child does poorly in school because of your own neglect, do your own principles really matter? Should you focus on your child as well? Eun-pyo needs a lot of growing up to do – she needs to first realize something’s wrong with her children’s upbringing. Raising children is no joke, and I know this is harsh, but Eun-pyo needs to work double-time to make her children future responsible citizens. If they are already struggling in elementary school (without the extra classes, take note), how would they join the unforgiving society in the future? It’s just the first two episodes, so I’ll be counting on you, Eun-pyonim!

Byeon Chun-hui (Choo Ja-hyun) is so far becoming a favorite of mine. She is the typical SKY mother – great at organizing, socializing, and planning her children’s future. I don’t mean what she does is right, but at least she’s on track with her children’s lives. Unlike Eun-pyo who struggles with motherhood, Chun-hui is the queen mother of the class. She is the doctor’s wife, the top student’s mother, and the newly elected parent representative. Her goal is to enroll her daughter Yu-bin in the School for Gifted Children. Chun-hui is the typical grade-conscious and control freak mom – a perfect character for these types of scandalous dramas. LOL

Seo Jin-ha (Kim Gyu-ri) is Eun-pyo’s apparent rival here. She’s a famous artist and the elegant mother of a gifted son, Henry. Her relationship with Eun-pyo intrigues me the most because they started way back! She’s not just simply the wife of Eun-pyo’s ex. Their connection is much more complicated than that. My theory is that Jin-ha is the legit girlfriend of Louis (Choi Gwang-rok), and then when Louis and Eun-pyo met in France, they fell in love (without them knowing that they both know Jin-ha). And when Jin-ha surprised Louis in France, she learned that Eun-pyo and Louis are a thing. I’m honestly making up things at this point, but I am disturbed by his surprised reaction when Jin-ha first arrived in France. Also, can the show stop making Louis speak French? It’s annoying. I get that they want to establish that he’s a rich French businessman, but he doesn’t have to speak French to everyone. To make it more cringe, Jin-ha replies to him in full Korean. LOL

We haven’t learned much from the other two mothers except that Kim Young-mi (Jang Hye-mi) is a divorced woman with two children who remarries a director. Emotional connection and social justice are her core values in life. I like her, and she can be a good companion for Eun-pyo.

Lastly, Eun-pyo’s cousin Park Yun-joo (Joo Min-kyung) is a mother who tries hard to build rapport with other moms. She is a kiss-ass type who will not hesitate to abandon Eun-pyo just to create a good image for her and her daughter. Yun-joo is also a gossipmonger! LOL. I don’t pay much attention to her since she’s the type to get herself in trouble sooner or later.

I’m not sure why the drama is called the “Green Mothers’ Club” yet, but based on the pilot, mothers are tasked to help usher the school children on the streets. The green means the traffic sign, I guess. It’s interesting how this “club” will help these five mothers form a bond when they all have strong personalities, to begin with.