Just when you thought it’s just another humanoid story, Are You Human, Too? is here to prove us there’s more to it than its eye-candy lead stars. I liked the pilot episode very much, and it gave me a pretty strong impression about the way things will go in the future. I hope this impressive premiere won’t go downhill from here. Come on, even Seo Kang-joon predicts that this will be KBS’ next big hit!

We open the cinematic universe with the introduction of Nam Sin, the first android, and her genius scientist mom, Oh Ro-ra or just Aurora (Kim Sung-ryoung). She’s pretty good for someone who has developed a robot in the effin’ 90s! This android kid was a perfect resemblance of her own son who was taken away by the filthy rich daddy of her dead husband. Clouded by grief, she made her own droid that looked like her long lost son over the years. 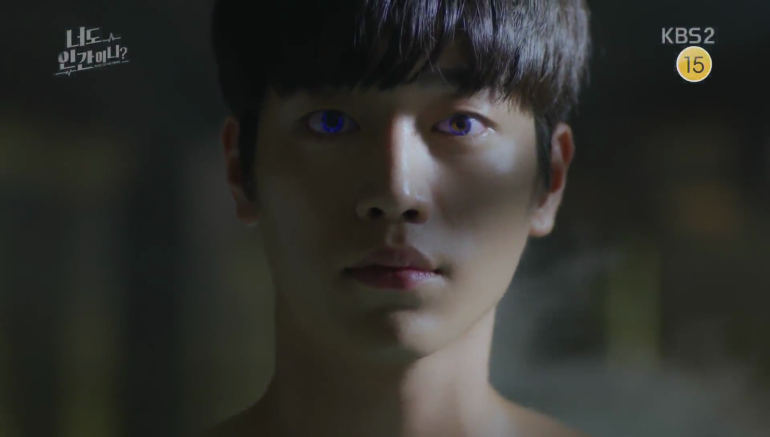 Fast forward to 2018, Nam Sin (Seo Kang-joon) is now a grown ass prick who hits women. Yep, that’s what it is. Although I’m not really happy with this scenario, I’m going to give this SOAB a chance to redeem himself when he wakes up from coma…

Speaking of hitting women, I don’t really know what came to Sin’s mind why he has to go that far. In order to leave the country in the most scandalous way, he hired a pap to take pictures of him, which is a no-no for the elite. That nameless pap then asked her bodyguard friend Kang So-bong (Gong Seung-yeon) to do it in her stead in exchange for some moolah. Not knowing that this was all staged, So-bongie tried to take snaps of Sin the prick kissing a nameless idol for scoop. Of course, Sin made it looked like he caught her in the act, destroyed the camera, and hit her pretty face before an amused crowd at the airport. The prick then took off to a flight bound to Czech Republic to search for her missing Mom.

He was unaware of the grand plan to make him disappear by just another greedy villain in K-dramaland, Director Seo Jong-gil (Yu Oh-seong), an outsider who is after the company PK Corporation. Of course, being the only grandson of the ailing chairman, Sin is the only heir to the throne. But the backstabbing director isn’t happy about being just an employee, he wants to get a hold of the entire company, which prompts him to hire some other bad guy to tail Sin and make sure he never comes back. Also, her daughter (Park Hwan-hee) is apparently Sin’s fiancee!

Meanwhile, in the beautiful Czech Republic, Aurora is living well with her third android installment, Nam Sin III (also Seo Kang-joon), a full grown adult Nam Sin with perfect human senses. He can smell and eat, just like anyone else!

But things got interesting when the two Sins met face-to-face! I’d like to commend Seo Kang-joon for making sure we knew who is who. He can be the sweet and innocent Nam Sin III, and the grumpy chaebol Nam Sin at the same time in split screen! Too bad this reunion was marred by the annoying truck of doom, but at least now we get the story moving, right? This show got me hooked with Kim Won-hae as So-bong’s father Kang Jae-sik. I love him in every drama he appears in! Looking forward to more scenes at the gym where So-bong and her fam lives.

Omo, Lee Joon-hyuk is Ji Young-hoon, the BFF-slash-secretary who was born poor, grew up in an orphanage, and raised by PK Group as one of its scholars! Very common. But from the get-go, I can feel that Ji Young-hoon will stay loyal with the Nam fam and help Sin III in his play pretend.

I particularly liked Mom’s Rule No. 1 for her android sons… Whenever he sees someone crying, he will give her a hug. I think we’re going to use this one rule for some skinship with the OTP later on…