Nam Sin 3 (Seo Kang-joon) just keeps getting better in making us fall in love with him with every passing episode! The way he heroically saved the abducted So-bong (Gong Seung-yeon) from the snake tattoo guy through his own judgment and AI abilities. Also, the snake tattoo guy got hit by karma real hard! He died in a hit-and-run incident (it’s staged) just like the way he perpetrated the hit-and-run incident of the human Sin (also Seo Kang-joon) in Czech Republic.

How cute is Maibo seriously???? He’s just so adorable just like Namsin! So-bong and Namsin’s relationship is getting deeper and deeper by the day. I feel like I also fall for Namsin more and more with the way I see him treat So-bong so thoughtfully.

Ah, Ye-na (Park Hwan-hee) is really getting into my nerves! Good thing the wedding didn’t push through! I even hoped that since she is now aware (and she heard it herself) that her father was responsible for Sin’s car accident, she would be embarrassed and distance herself from Sin. But man I was wrong! She even had the nerve to invite herself and stay over at Sin’s hideout!

I can’t believe Laura still calls herself Namsin’s Mom after everything! I even treat her as a villain now, joining the ranks of Director Seo in my hate list. How dare she thought of activating the kill switch just because she can’t control Namsin anymore??? Good thing David was able to stop her from doing such drastic measure against the poor robot.

Also, can we talk about the way Mom yelled at Namsin that she needs the “real” Nam Sin in his face! My gosh, I was so furious just by watching at her! To be honest, Laura really failed at being a Mom to both her real son and the robot. All these years, she never really made a move to connect to the real Sin, even in secret. I know Grandpa and Director Seo threatened her before but that’s not what motherly instincts tell me. Mothers would do everything to protect their child, not let them grow up in the enemy’s den. Also, now I realized that she never really loved those three Namsin robots. She only made them so that someone, who looks like her lost child, would hug and comfort her.

I remember early on in the show that Mom mentioned about having an anonymous sponsor for her scientific researches. I really did not think of Sin’s Grandpa Chairman to be that sponsor! Wow. And apparently, David is also working for the Chairman all these years! Double wow. So he did not only track Laura all these years, he also knew that Namsin is not his real grandson but a robot all along!

It’s just so overwhelming to take this in. Grandpa is really creepy with all that room full of circuit boards, which apparently contains all the information in Namsin’s “brain.” Waaahhh. from the dementia act to this one, I’m shookt about the real motives of Grandpa!

Does Young-jooni (Lee Joon-hyuk) really cares for uri Namsin now? I’m still having reservations about his real feelings towards the robot, but now, I can see that he looks after Namsin the way he takes care of Sin, too. 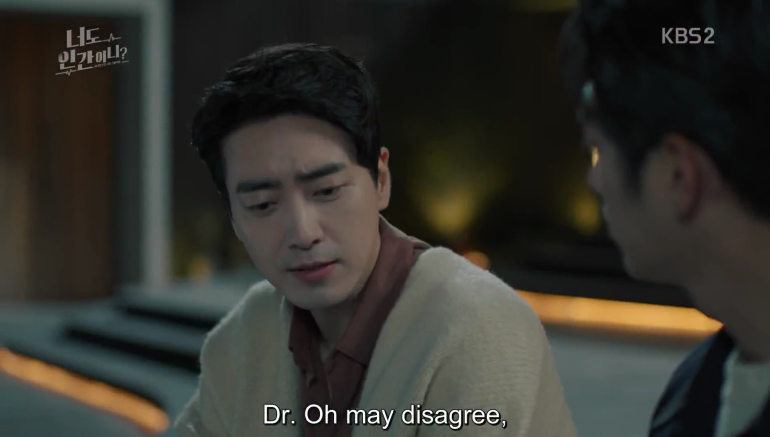 Namsin 3 in his most human form. Hehehe

Awwww, just when the doctor was about to give up on Sin, this happened!